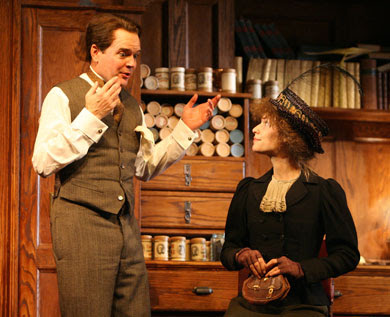 Photo/Joan Marcus
David Grindley is following on the heels of Journey's End with another excellent revival, Pygmalion. And while the focus has changed from crass war to high etiquette, the shows have much in common: save for a wide-open scene that's inaudibly set in the middle of a rainstorm, Jonathan Fensom's sliding shoebox sets are as claustrophobic as ever and, thanks to Jason Taylor's lighting, either dimly lit (in Mr. Higgins's study) or blindingly bright (his mother's drawing room). Not to mention returning stars Jefferson Mays and Boyd Gaines, who play the intellectual naifs who tamper so unwittingly with a young woman's character and soul. Mays is the ideal choice to play this dialectic and didactic dialect coach, given his strong TONY winning performance in I Am My Own Wife, and Gaines (as in Gypsy, earlier this year) provides an upright balance for that petulant youth. Claire Daines is in tough company, but she acquits herself well -- I only wish that her accents didn't seem to stifle her physical freedom. The far better example of cockney transformation comes from Doolittle's moralizing father, played here by Jay O. Sanders (the exaggeratedly straight man, as he was in A Midsummer Night's Dream). The production really makes the most of Shaw's use of language, especially given such hummers of lines like "What is life but a series of inspired follies?" or "Do any of us understand what we're doing? If we did, would we do it?" Grindley's direction makes for a realized life that is inspired (but not folly), and one need only look closely at Mays's flash of realization at the close of the play to see how true it is that we never truly understand ourselves.
Posted by Aaron Riccio at 12:00 AM