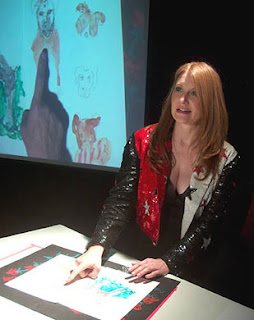 Appearing more like a professor giving a lecture with her glasses, an elegant black dress and a smart, shiny jacket (she begun "class" by thanking a number of her students in the audience), the notoriously edgy Karen Finley presented two new works: "The Dreams Of Laura Bush" and "The Passion Of Terri Schaivo". Being a Finley virgin but at least culturally aware enough to have her on my radar, I was quite thrilled and just a little anxious to finally catch her live as she had been described to me by a friend as a "brilliant loose cannon". No naked ketchup smearing or anything like that here, however, this decidedly refined hunk of performance art still had a dangerous edge to it. In the chatty "...Laura Bush" where she played the first lady talking about her many dreams; some were frankly sexual (yay!) and others extremely politically controversial (fun!). Her stream of consciousness "Terri Schaivo" piece often got her so distraught that she began crying as she compared the comatose bulimic to Mother Theresa AND a terrorist. Both pieces at times were equal parts distressing, confusing, and interesting, and every once in a while she would make a very huge point where I was like- WOW, that's where she was going with this. During the performance she was very connected to her audience adopting a very conversational tone, at one point interviewing them on the volume of her voice, at another wandering through the audience hunting for a blinking light that was "bugging" her. I was wearing my Halliburton gas station shirt, a kitschy favorite that I'd found in a second hand store in years ago in Texas. Quite honestly, I was afraid that she would notice it and have words with me over it to the point that I was actually covering up the patches with my hands whenever she got too close to me. Next time, and there will be one, I think I'll just stick to basic black.
Posted by David Bell at 12:56 AM