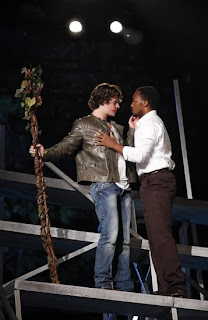 I cannot imagine an actor less suited to the role of Dionysus--the vicious, sexually charged god of wine--than Jonathan Groff. In Joanne Akalaitis' sterile new production of The Bacchae at the Delacorte Theatre in Central Park, Groff cuts an attractive figure in his quasi-Jim Morrison jeans and bejeweled denim jacket, but whenever he opens his mouth to deliver Euripides' poetry, the battle is lost. That almost nothing in this production works is both terribly sad (considering the lack of major classical theatre productions in New York City) and not entirely unexpected, given Ms. Akailitis' history of putting her own directorial intentions above textual accuracy. She has set a large part of the Chorus text (in a new, serviceable translation by Nicholas Rudall) to an original score by her longtime collaborator and former husband, Philip Glass, that lacks any semblance of cohesion or tonality. The Chorus itself, often perched on a set of bleachers that act as the only real set piece, never seem entirely together throughout the proceedings. Among the principle actors, only Joan MacIntosh's Agave approximated the correct tragedian style. Her anguish upon discovering that, under Dionysus' spell, she murdered her own son, Pentheus (Anthony Mackie, still finding his footing), registers as the only truly thrilling moment of the evening.

Note: I attended the first preview of this production, so my opinions reflect something that is obviously still very much a work in progress. However, considering the abbreviated length of the run (it closes August 30), I felt that it was better to publish my thoughts now, rather than waiting until the production officially opens on August 24.
Posted by Cameron Kelsall at 8:46 AM

I enjoyed "The Bacchae" and especially the whole evening in the park, the overcast skies and shadows among the trees. Unfortunately I have to agree with Cameron's comments. There was a lot of stage thunder but little sense that more than a sassy rock star, Dionysus is a god among men. The grandeur of tragedy seemed reduced to a contest among all too human rivals. Jonathan Groff, as Dionysus, looked hot in a leather jacket, which he barely removed, and the stardust that covered him at the end suggested a late night at the disco not the otherwordly aura of the son of Jupiter and Semele.
The homoerotic exchanges between Dionysus and Pentheus were coy, predictable,uninspired. The crossdressing in the play would have been an opportunity to go to another level of interpretation, to show the tension between reality and appearance, the very stuff of theater. Instead, Anthony Mackie, a gifted actor, ended up looking like Ru Paul, whose mastery of cheap high heels barely elicited a few giggles from the audience.
The chorus had some wonderful moments, as did Joan Macintosh as the grieving Agave, but not enough to put the play where it needed to be, beyond facile coincidences with our own time, toward the representation of what is timeless, horrifying yet beautiful to see onstage.