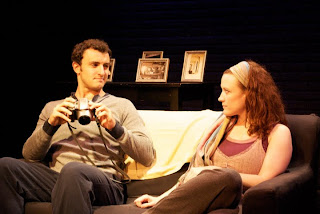 When you learn early on that the protagonist (played by Louise Flory, also the playwright) has recently survived a brain aneurysm, you might be led to expect a tearjerker of the tv-movie variety. But the playwright isn't exploitative; her thematic focus is more true-to-life and her writing shows more curiosity than that. The play is really about the shifts that occur in the character's relationships after her mortality has seeped into everyone's consciousness. The play does have a sneaking cumulative emotional payoff but it's delicate and unforced. I wasn't totally convinced by the dialogue in the couple of scenes between the play's two male characters - it just didn't sound to me like the way men talk to each other - but the writing is otherwise solid throughout, distinguished especially by a sureness of tone and a keen understanding of the drama that builds incrementally with deceptively small events.
Posted by Patrick Lee at 2:48 PM