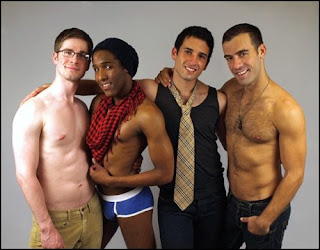 A "Sex And The City" peopled with martini-swilling gay-fabulous twenty-somethings, Jason Mitchell's The Boys Upstairs could be adapted right this minute into cable TV's next hit series. The three gay male friends of the title are privileged sitcom-ready examples of, to quote the play, "the generation of gays that have had it too easy", but the playwright's clear affection for the characters (as well as endearing portrayals from a group of winning, appealing actors) makes it near impossible to resist them. The well-paced, often hilarious comedy has more heart than might be first thought - its softly-sold message is ultimately about the importance of friendship - and there's something fresh about the play's youthful nothing-to-prove attitude: it's not only post-tolerance, it's post-assimilation.
Posted by Patrick Lee at 10:32 PM