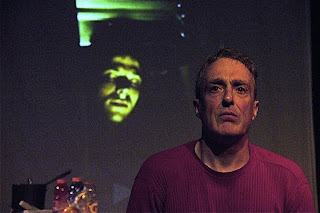 Early on in this intense 90 minute solo show (written and directed by Kirk Bromley) performer Dan Berkey makes hand-to-hand contact with most of the people in the audience. That moment of connection is a shrewd, brilliant move, because it guards against us distancing ourselves once the calm, lucid man we've met transforms into a full-blown schizophrenic. The harrowing, claustrophobic show plays like a series of his psychotic episodes during which we're inside his often incoherent stream of consciousness - it feels like a terrifying, violent freefall into insanity. The playwright has very definitely organized the show into distinct vignettes and themes - a section in which a slidehow of graphic pornography segues into candids of non-sexualized female faces is the most wrenching, while a section where schizophrenia proves helpful for the make-believe needed for stage acting is downright funny. Despite the organization, the playwright has done all he can to erase his hand and let the show feel chaotic and random and the performer convinces at every single moment. The result is a one-of-a-kind, undilluted and unforgetttable trip into the crazy.
Posted by Patrick Lee at 2:15 AM