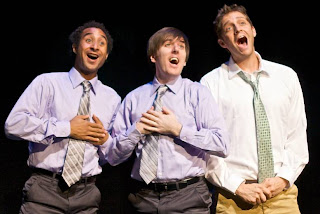 It's a mystery what this earnest 70 minute revisal of this dusty old musical is doing in the Fringe: did the York pass? The show was already last-gasp in 1968 when it debuted, a throwback to the template in which every secretary's default dream was to find a husband. Ben West has dug it out of mothballs and done a commendable job of trimming and re-shaping the material, but he's basically spruced up a yellowed museum piece. It's an irrelevant, standard issue musical comedy of yesteryear. Presumably the reason is the show's score (music by Elmer Bernstein, lyrics by Carolyn Leigh) which has more than a couple of square charmers, but since when is the Fringe a try-out for Encores? Undoubtedly there is some appeal in this enterprise for devotees of old musicals, but that enjoyment is likely to be mitigated by the production's lack of attention to design and production value (yes, even by Fringe standards) which summons the feeling of a community theatre rehearsal. In the plus column are the instantly likable and charismatic leads (Colin Hanlon and Cristen Paige) who are so much more skilled and entertaining than all else on stage that I've no doubt I'll be seeing each of them in many other things in the future.
Posted by Patrick Lee at 2:54 AM