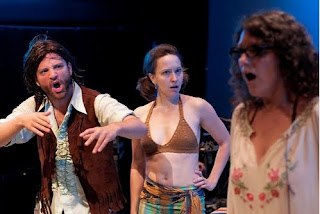 My reaction to this one-act musical went from mild amusement to annoyed tolerance to outright loathing within 20 minutes. Is there a reason we have been asked to watch a snarky, cartoon-thin spoof of the Manson Family murders in which everyone, criminal and victim alike, is turned into an object of snickering mockery? There's stage craft and songwriting skill on display, and many performers giving their fully committed all, but the material is bad taste for its own sake. The use of a square law-and-order narrator recalls the Jack Lord character in the in every way superior Manson Family Opera - here the character is eventually cross-dressed as Tiny Tim to infiltrate the cult for no apparent reason but convenience. The mocking caricature of Sharon Tate, the cult's most famous victim, is a new low in cynicism: are we really being cued to laugh at what a Hollywood bimbo she was, when we all know how viciously she, and the baby she was carrying, were murdered?
Posted by Patrick Lee at 6:41 AM