May-December With The Nose And Clammy 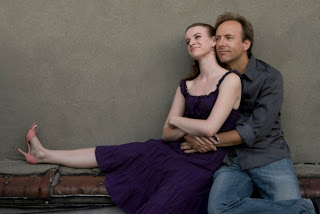 I'm hard to please when it comes to romantic comedies, but I was instantly won over by this one-act which keeps the light comic tone of the genre but gives its couple true-to-life rather than easy-to-solve problems. The heroine (played with irresistible charm by Naomi McDougall Jones, also the co-writer) laments early on that in movies the girl has to choose between the guy who is clearly great and the one is clearly an asshole, but in real life guys are a combination of the two. She can't make up her mind if she wants to stick it out with Noah (Craig Waletzko, also perfect for this material) and enlists us in direct address to help her decide as they re-enact the highs and lows from their relationship. Their conflicts aren't glamorous - she says he turns into a "swinging dick" when he's around his friends, and he says the accusation reminds him how young she is, 15 years his junior. He's insecure and clingy, she won't make him the only important thing in her life as he has made her in his. We all know problems like these and that recognition helps to make the show consistently engaging and memorable.
Posted by Patrick Lee at 5:18 PM