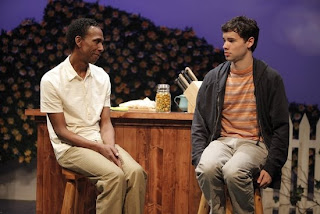 Capping 80 some odd minutes of "Lifetime movie"-sized doings with a "shock" ending (which I won't give away), Lila Rose Kaplan's Wildflower turns out to be a cautionary tale that seems to warn about the danger of not talking frankly with kids about sex. But what the painfully shy new boy in town does to the irritatingly precocious virgin in the play's final scene isn't merely misinformed - it's downright insane. The play's argument makes as much sense as saying that if you don't warn kids to wash their hands they just might stick them in a light socket. Most of the play's action is so bland that there's plenty of time for nagging questions - I wondered how a single mom could afford an indefinite stay at a bed and breakfast with her son on what she makes answering phones in a flower shop. The actors do what they can - Ron Cephas Jones comes off best, and Jake O'Connor is radar-worthy - but the play doesn't do them any favors.
Posted by Patrick Lee at 11:48 PM