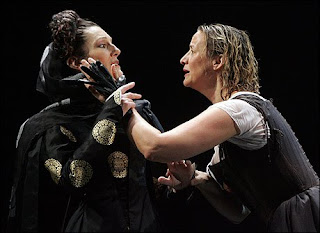 Although I never technically wrote a proper review of the Donmar Warehouse's production of Friedrich Schiller's Mary Stuart, which closes at the Broadhurst today after a four-month run, I cannot think of a recent Broadway show more deserving of praise. This past season was a watershed for both original dramas and revivals on the Great White Way, but none came close to moving me, thrilling me, or touching me as this 200-year-old German play about two strong-willed female rulers. Will we ever see the like of Janet McTeer's Mary--proud, fierce, even sexual--in New York again? When was the last time a contemporary actress so freshly and fearlessly embodied a classic role on stage? (Oh, right--it was McTeer herself, in Anthony Page's benchmark production of A Doll's House, back in 1997) Still, even though she is larger than life, McTeer's Mary never overshadows Harriet Walter's elegant Elizabeth I. Watching Walter, I felt both empathy for the hard choices that only Elizabeth could make and the true faith and doubt with which she appeared to make them. Each of the six times I saw the show, the actresses complimented each other beautifully, and I was happy to stand and applaud their joint bow each time. The production itself was smartly directed by Phyllida Lloyd and featured an estimable ensemble that boasted Maria Tucci, John Benjamin Hickey, and the brilliant Chandler Williams, one of the finest young actors currently working in New York theatre. However, the images that will remain indelible to me will always center around the two queens: the one on the throne and the one in the prison cell. Goodbye, Mary Stuart. We truly shall not see your like again.
Posted by Cameron Kelsall at 1:50 PM