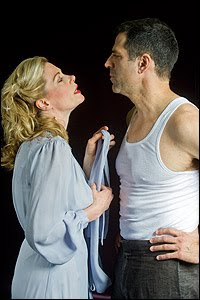 Marin Mazzie may seem an unlikely choice to play Blanche DuBois. Mazzie is tall, strong, and sexually confident--not the first traits that come to mind when describing the damaged, desperate Blanche. However, in the excellent production of A Streetcar Named Desire at Barrington Stage Company, beautifully directed by Julianne Boyd, Mazzie makes Blanche her own, using her strengths to make Blanche's unraveling particularly poignant and heartbreaking. Christopher Innvar's fascinating Stanley, rather than a simple animal, is a complicated man whose feelings can be hurt--an interpretation that brings fascinating textures to the play, particularly when Stanley is going head to head with Mazzie's Blanche. Kim Stauffer is superb as Stella, struggling between loyalty to her sister and loyalty to her husband. Considering the many annoying revivals of the classics of the past few years, where the directors were more interested in expressing themselves than respecting the writing (for example, All My Sons and the Roundabout's Streetcar), this production is a particular treat: while done with complete allegiance to the text, it offers a fresh point of view of a sturdy masterpiece.
Posted by Wendy Caster at 11:51 AM