[As with my review of Indian Ink, this post contains what may be considered spoilers to some. Read ahead at your own risk. -CK] 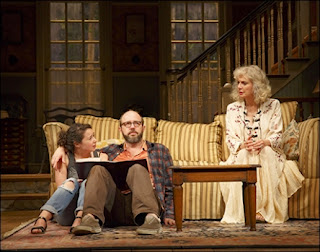 The Country House is a rare--and a rather wide--miss for Donald Margulies. At first I wondered if this was due to the playwright stepping out of his comfort zone. Then I realized that he doesn't really have one. He's written everything from standard domestic dramas (his Pulitzer-winning Dinner With Friends to searing accounts of the effects of war (2010's Time Stands Still) to chamber plays like his famous two-hander, Collected Stories. His plays usually feature strong female characters, and this one--ostensibly, at least--is no different. In the end, I've come to believe that Margulies is weighed down by the anxiety of influence.

This new play is nakedly Chekhovian. That particular Russian master has certainly inspired many American playwrights; Richard Nelson could probably thank the good doctor for his career. I've never seen much of Chekhov in Margulies' previous plays, though. Here, the similarities are obvious and heavy-handed. The title residence is in the Berkshires Mountains, close to the Williamstown Theatre Festival, where Anna Paterson (Blythe Danner) has been a mainstay for years. At the beginning of the play, she's returned to Massachusetts for the first time since the death of her daughter Kathy--herself an actress of renown--the previous year. Also on hand are Anna's son, Elliot (Eric Lange), a failed actor working on writing his first play; Walter Keegan (David Rasche), Kathy's widower, who arrives with his new fiancée (Kate Jennings Grant, making the best of an underdeveloped part); and Walter's daughter, Susie (Sarah Steele), a senior at Yale. Also on hand is Michael Astor (Daniel Sunjata), a family friend and major television star, doing a short stint at the festival in a Restoration comedy to earn back some stage cred. Over the course of two acts, the group comes together, comes apart, comes together again, air grievances, and realize--to varying degrees--what the roles they play, both on and off stage.

Many of the analogues are clear. Astor, the successful but bored actor, recalls Uncle Vanya's Dr. Astrov (even the name's a hint), while Walter and his younger lover, Nell, stand in for the Professor and Yelena. A tryst between the two is inevitable. Elliot is somewhere between Uncle Vanya and Konstantin, the playwriting, approval-seeking son in The Seagull, while actress Anna is a less brittle (but still hard) Arkadina. Susie has shades of The Cherry Orchard's Varya, with a little Sonya thrown in for good measure. So perhaps it's not surprising these characters often seem like they should be in different plays.

Very little tension is established in Act One; everyone is still saddened by Kathy's death, though no one is overly hostile to her husband bringing his new woman to the family estate so shortly thereafter. Even Susie, while not necessarily welcoming, isn't outwardly resentful. When most of the finds Nell and Michael sharing a kiss, the fact is barely addressed. Elliot feels that he's been given the short end, having never approached the success of his mother and sister, and while Lange gives the most impressive performance of the evening, he can't make the character's eventual breakdown seem like anything more than a whine.

Danner is clearly the draw here--the theatre's marquee and playbill cover little more than a still-shot of her--yet Anna is perhaps the most inconsequential character of the piece. She is absent for long stretches of the play, and even with her talent, she can't make the character register all that much when she is around. It just isn't a very well-crafted role. Steele--one of, if not the, best young performers in working in theatre--likewise makes little impression in the layerless role of Susie. Rasche is entertaining as a director who's happily traded the theatre's exigencies for the financial comforts of Hollywood, while Sunjata is underwhelming as the actor who feels guilt for selling out.

Let's hope that, for his next play, Donald Margulies returns to using his own voice.