While I Yet Live 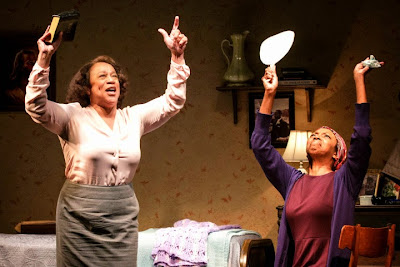 photo: James Leynse
Billy Porter, the talented, Tony-winning star of Kinky Boots, makes his playwriting debut with the autobiographical drama While I Yet Live. The production, directed by Sheryl Kaller and presented by Primary Stages, is handsomely staged and generally well-acted, but the play--like several of its central characters--suffers from an identity crisis. Porter doesn't seem to have known what he wanted to write: is it a kitchen-sink family drama, a coming-of-age (and coming out) story, a meditation on faith and its effect on black lives, a record of hard-won personal growth? In the end, he tries to incorporate all of these elements into one play, and the result is lopsided.


The play's first half-hour is promising. It opens in Pittsburgh on Thanksgiving Day, 1993. Seventeen-year-old Calvin (Larry Powell), it is implied, has recently come out of the closet to his mother, Maxine (S. Epatha Merkerson). Being devoutly Pentecostal, Maxine views her son's sexuality as an affliction they must work together to cure. With the encouragement of Maxine's terminally ill best friend, Miss Eva (the superb Sharon Washington), herself viewed by many in the family church as a fallen woman, Calvin is learning to love himself just as God made him. This causes tension throughout the family, as Maxine cannot reconcile her faith with her motherly love. There are many other secrets burrowing around, but it would be too much of a spoiler to reveal them here.

The struggle between love and fear is played out beautifully by Merkerson. Maxine herself is disabled--a result of delivery complications at birth--and she knows first-hand the pain being different can cause you in a conservative community. She is also a woman whose only comfort seems to come from her faith. At this early juncture, Merkerson precisely captures what it would cost Maxine to love her son unconditionally.

Unfortunately, the play goes off the rails once the action shifts seven years ahead in time. [Stop reading now if you wish to avoid spoilers]. Many of the characters featured in the play's first scene--Miss Eva; Maxine's mother, Gertrude (a miscast Lillias White); and Calvin's stepfather, Vernon (Kevyn Morrow, making the best of a poorly written role)--are now dead. They form a Greek chorus of sorts. The dialogue is overly stylized, and the performers seem to not have the rhythm down, which makes it very awkward. (No one was prompted, but there were a few actors who didn't appear to have full command of their lines yet). The entire conceit is a regrettable decision, one the play could easily do without.

The second act, which takes place in 2008, is perfunctorily telegraphed. Though Merkerson, Powell, and Sheila Irving (as Maxine and Vernon's daughter, Tonya) continually do fine work, there is very little pay-off as the play moves towards its rather obvious ending. The characters have grown--we knew they would--but we don't understand how.

Porter is not without skill as a writer, but he would benefit greatly from a strong dramaturge who could refine his storytelling and his style. Regrettably, While I Yet Live tries to do so much that it ends up accomplishing little.