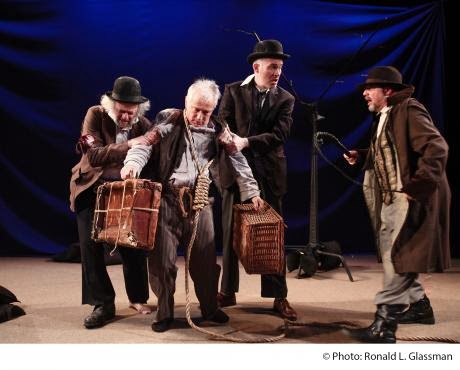 Waiting for Godot is one of those masterpieces of modern drama that everyone has read or seen or, at the very least, picked up the basics of through cultural absorption. (If you have managed to make it to this point in your life without ever having heard a thing about the play, here you go: Two guys with memory issues wait around in a sort of dreamy, disconnected wasteland for someone named Godot. They meet two other memory-challenged guys who are locked in a real whopper of a power struggle, and the four of them all kill time together. Then there's an intermission, and pretty much the same things happen again in act II. At the end, the original two guys go back to waiting on their own. Godot never shows up.) Being the landmark that it is, Godot has been translated into many languages and gets staged an awful lot all around the world. Since it first showed up in New York City in 1956, Godot has been performed by Very Big Names. The Broadway premiere featured Burt Lahr and EG Marshall; a revival the following year starred Geoffrey Holder, Earle Hyman, and Mantan Moreland.

As if convinced that the show wouldn't click with....well, with anyone unless very famous men were in it (Becket wasn't cool with with the idea of women doing the show), producers seem to have made star-studded casts a requisite for any New York-based Godot revival. BAM staged it in the late 1970s with Sam Waterston, Austin Pendleton and Milo O'Shea. The Mike Nichols production at Lincoln Center in 1988 went simply balls out with megawatt famousness: it featured Robin Williams, Steve Martin, Bill Irwin, F. Murray Abraham, and Lukas Haas. In 2009, Nathan Lane, John Goodman, John Glover and Bill Irwin (again) took Godot on; just last fall, Ian McKellen, Patrick Stewart, Billy Crudup and Shuler Hensley appeared in yet another starry revival.

It occurred to me the other night, after agreeing to attend a performance of Godot in Yiddish at the tiny Barrow Street Theater in the West Village, that the play has been revived so frequently, and so fancily, that I've just never bothered to see it. I've read it, sure, but I've never seen one of the star-studded casts perform this monster masterwork about the tragicomic nature of human existence. My bad; it's just one of those shows, like King Lear or Grease, which shows up so often that I always figure I'll easily be able catch it the next time around.

The other thing that occurred to me--after I'd committed to a date and secured a ticket to the Yiddish version--that maybe my first time seeing Waiting for Godot should have been in a language that I actually understand.

But I shouldn't have worried, even a bissel. Who needs enormous stars when you have a cast of people who have not only devoted themselves to the craft of acting, but also to the perpetuation of a ravishingly beautiful, achingly expressive pidgin language? And who needs to comprehend everything in a play that is not meant to be completely comprehensible? The upshot: I heartily enjoyed Vartn af Godot, despite knowing a mere handful of Yiddish words and expressions, and despite having not seen the play before (or having read it in at least two-and-a-half decades).

Godot has been performed in various languages (French first; Beckett's own English translation thereafter), but this production is the first in Yiddish; the translation was done by Shane Baker, who played Vladimir. The friend and colleague I saw the show with--a specialist in Yiddish theater--argued that Godot would absolutely have been translated earlier, had the Holocaust not wiped out a vast majority of European Jews. The production may be new, but the connection between the play and the language feels ages-old: it's a perfect fit. I read somewhere that Godot was meant, by Beckett, to be performed with as much emphasis on humor as on sorrow, and wow, does Yiddish fit the bill on this front. Beckett specialists may disagree with me, but Godot strikes me as being less about the beauty of the prose as it does about the rhythms and flows of language--any language--that is being spoken by people who are pondering (and desperately killing) time. It also didn't hurt that, Yiddish or not, Vartn af Godot was performed by a cast of men (and one little boy) who were top-notch.

Which doesn't mean I didn't have a few issues with the production.The biggest is that Godot is a very talky show; the characters, after all, don't do much but stand around shooting the shit for two-plus hours. As a result, while I was eternally grateful for the supertitles, I was also jealous of those in the audience who didn't have to rely on them, since I spent about as much time reading the prose as I did watching the actors. This is not a flaw in the production, per se--it's a flaw in me for not speaking fluent Yiddish.

Also, and this is admittedly a petty gripe, I found myself wishing that the costumier would find a way to keep the excellent David Mandelbaum's pants from sliding too far down his belly as often as they did. I get it: Estragon's pants, held precariously around his waist for much of the show, fall to his ankles late in the second act. But Mandelbaum spent a great deal of time yanking them back into place through much of the show, which I suspect was more out of necessity than design. I found the constant tugging distracting, and wondered if Mandelbaum gets sick of having to fuss with the pants the whole time he's onstage. Nu, maybe there could be some velcro on the pants?


But seriously, then, who the hell cares about a little pants-yanking? Vartn af Godot was a pleasure to watch, and I salute the New Yiddish Rep for their mission, their dedication, and their groys talent. Whether you speak Yiddish or not, you should check the production out because it's terrific. I hope the New Yiddish Rep is considering following Godot up with a little Sartre, or perhaps a smattering of Ionesco. How do you say "Rhinocerous" in Yiddish, anyway? [This just in: It's nozhorn--lit: "nose-horn"!]
Posted by Liz Wollman at 2:44 PM