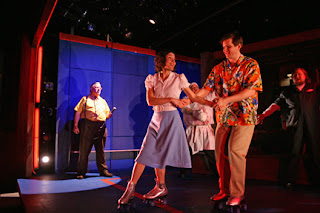 I have six shows that need to be blogged but the others can wait: Adam Rapp's new play, currently at Playwrights, is all kinds of fresh and fascinating, a sensationally unique comedy that flirts with absurdism and whimsy while always grounded in a dark vision of (perhaps especially American) fears and anxieties. The core story may sound like something we'd expect from Rapp - a fearful, seemingly traumatized woman inches closer to the profoundly paranoid and potentially dangerous loner who works as a tackle dummy in her self-defense class - but what we don't expect is how Rapp holds onto the gravity of what's fear-based and dire in his material while pitching it for offbeat comedy, with flashes of David Lynch-like deadpan, Christopher Durang-like satire, even the false cheer of especially sad Dennis Potter musical numbers. I saw an early preview, but the play is already tight and all the performances are already on the same page of quirky heightenedness: there's no reason I can think of not to see this sooner rather than later.

A more in-depth review at New Theater Corps.
Posted by Patrick Lee at 12:59 AM