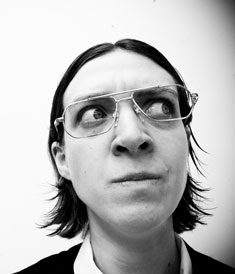 In a 1915 poem by TS Eliot called "Hysteria," the anxious narrator becomes disturbed by his date's raucous laughter. The show Hysteria, created and performed by the group Inspector Sands (Lucinka Eisler, Giulia Innocenti, and Ben Lewis), is a riff on Eliot's work. That it is an absurdist riff is made clear from the beginning, when the gender-ambiguous, obsessive-compulsive, paranoid wait-person, while preparing for work, discovers that one of his or her teeth has migrated to the back of his or her neck. The people on the date are a nervous young man who periodically breaks away from the date to lecture the audience about his research and an equally nervous young woman who keeps a red boa and a couple of bananas in her purse. There's little plot to speak of; instead, the show consists of moments that sometimes lay bare the differences between our inner and outer beings and sometimes are there because they are funny, because the physical humor meshes perfectly with the talented cast's abilities, or, well, just because. Hysteria's 55 minutes go quickly, and it is frequently entertaining. It's not everyone's cup of tea, but if you enjoy graceful physical humor and absurdist theatre, you'll find a lot here to like.
Posted by Wendy Caster at 2:41 PM 5 comments: 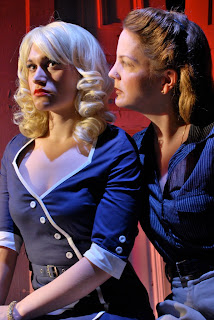 My knowledge of Jean-Paul Sartre's No Exit was limited to the line, "Hell is other people," so I grabbed the opportunity to see the Invisible City Theater Company's production of John Bowles's translation of Sartre's existentialist classic. Because their production of Arcadia years ago was excellent, I was optimistic about Invisible City's No Exit and I was mostly not disappointed. Granted, the production is not perfect. Cecelia Frontero doesn't nail the role of Inez, and her odd-fitting pants distract from her performance. There is little by the way of production values, and some of the light cues are arbitrary and annoying. But, on a whole, the cast and director David Epstein provide a vivid, emotional, hard-hitting production of Sartre's still timely play. The storyline is simple: three people are locked together in a room in hell for eternity, and they discover little by little that they are one another's punishment. Cradeau (Alex Cape) is a hard-hearted coward; Estelle (Jenna Doolittle) is an adulterous blonde who has murdered her own child; and Inez is a cruel lesbian who pushed her cousin aside to be with his wife, eventually leading to her cousin's death (interestingly, the play doesn't point to her lesbianism as the source of her evil, but rather to her behavior, an advanced point of view in 1944). The three jostle for power and allegiances and maybe redemption, all the while knowing that they are damned in the most horrible, permanent sense of the word. Invisible City's production is funny, unsettling, and satisfyingly claustrophobic.
Posted by Wendy Caster at 3:20 PM 4 comments: 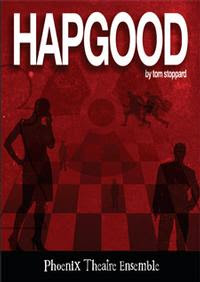 Tom Stoppard is a brilliant playwright, but sometimes he can't tell the difference between a play and a lecture. Hapgood's ratio of physics versus theatre is unfortunately skewed toward the former, and while Stoppard's conceit of having the plot reflect the physics is strong, its execution is confusing. Hapgood is an iconoclastic spy for England. She uses the dedicated phone line to the prime minister to talk with her son; she has sex with other agents (English and otherwise); and she does what she wants when she wants. In Hapgood she is faced with a dilemma. A double (or is it triple, or is it quadruple?) agent has given secret information to the Russians. Has Kerner, the physicist and Russian agent turned English agent (and father of her son), been turned again? What has Ridley been up to? What about the twin Russian agents? And, also, will Hapgood find true love and settle down? Stoppard draws smart and interesting parallels between the behavior of light waves/particles and the behavior of secret agents, but the play ultimately comes across as dry, with too much stuff going on--too many twists and turns, too much physics, too many lectures--and not enough humanity. The Phoenix Ensemble does a valiant job presenting this challenging play, and succeeds intermittently. Joe Menino as Kerner is charming and presents scientific ideas clearly while sounding like an actual person. Jason O'Connell and Craig Smith also bring much to the production. Elise Stone, in the pivotal role of Hapgood, gives a surface-level performance, with little variety to line readings (speaking fast does not a character make) and too much "matter-of-fact-ness" to be real. As the other Hapgood, she denotes quirkiness by fluffing her hair, and fluffing her hair, and fluffing her hair. The direction by John Giampietro is good but he doesn't succeed in bringing a maximum level of clarity to the goings-on.
Posted by Wendy Caster at 2:15 PM No comments: 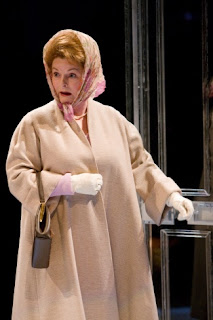 Sometimes ambiguity adds suspense and atmosphere to a production. Sometimes it is just confusing. At the beginning of Edna O'Brien's Haunted, part of the Brits Off Broadway festival at 59e59, two women are barely visible behind a translucent wall. As an old man implores, "Stay, stay," the lighting changes and the women vanish. Add this opening to the title Haunted, and it is reasonable to expect a ghost story. However, the production never clarifies whether we are seeing ghosts, flashbacks, or a dramatization of the old man's probably unreliable memories. Rather than adding to the play's impact, this ambiguity diffuses it, pulling focus from the story at hand, which is somewhat interesting: the old man starts a platonic relationship with a young woman, allowing her to believe that his wife is dead. His wife, already unhappy with his sexual coldness and his past adultery, becomes suspicious and eventually incensed. But the relationships aren't quite convincing. For example, although the young woman is lonely, and the old man flatters her, it is still difficult to believe she would befriend him, as his urbanity and almost charm provide only a fragile veneer over his pathetic lechery. As played by Brenda Blethyn and Niall Buggy, the husband and wife come across as more compelling than the writing might warrant, though Beth Cooke fares less well as the young woman. The play's main strength is its use of language, which is often beautiful and frequently quotes great writers, particularly Shakespeare.
Posted by Wendy Caster at 1:42 PM No comments: