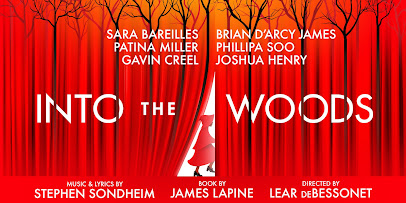 Sometime right after the 9/11 bombings, I had a nightmare: I was doubled over with laughter in a comedy club, when a plane crashed through the roof. It was a pretty straightforward dream, borne of the sorrow, trauma and anxiety of the moment, but it also drove home how wracked with guilt I felt about missing joy as keenly as I did in the weeks following the attacks. Laughing didn't come easy in a stretch when the whole city was crazy with grief, and displays of mourning became briefly, unsettlingly common. I'd never seen as much public weeping before; I'd never been more aware of how inappropriate joy felt, or how deeply I craved it.

I'm grateful that no one involved in the giddy, bubbly revival of Into the Woods gave in to guilt, trauma, grief or anxiety, or even the urge to refer in any way to the current state of things. I'm sure the temptation was there: fairytales perpetuate precisely because their broad strokes fit just about any cultural moment with ease, and we're mired in a pretty dark one to which most live productions have chosen at least a passing nod. Also, any musical that deigns to reflect the entirety of human existence, including the whole spectrum of emotions, practically demands at least a few moments of weight. Especially if said musical happens to be by an intensely loved and only recently deceased artist whose genius has been loudly reinforced for over a half-century. If there was ever a time during which Woods might lean into its characters' angsty disappointments, anxieties and heartbreaks, it'd be now.

Then again, things were pretty bad during the Great Depression, but that didn't stop Fred Astaire and Ginger Rogers from having the most delightful time gliding across some tastefully decorated ballroom. What makes this production similarly sublime is that it opts to be loose, broad, frothy and fun without ever cheapening the material. Audiences don't always need to reminded that they're traumatized, disillusioned, and sad. The characters in this production surely are too--they're us, after all--but they're also tough, adaptable, funny and thoroughly unwilling to let life's disappointments, crises, or even unspeakable tragedies get in their way.

Swiftly, playfully directed by Lear DeBessonet, Into the Woods features a stellar cast of Broadway veterans, relative newcomers and some very endearing puppets. The actors lean almost consistently into life's pleasures: Julia Lester's voracious Little Red Ridinghood is most obvious (and hilarious) in this respect, but Patina Miller's Witch, for all her tsuris, does a bodily undulating dance whenever she hears Rapunzel's voice, and Sara Bareilles' headstrong and breezily independent Baker's Wife makes a lot more sense than she ever did: sure she loves her husband, but why not take a quick roll in the hay with a fatuous Prince (Gavin Creel) while your heart's still beating?

The whole cast exudes joy and  makes Sondheim's complicated score sound as easy and as miraculous as breathing. I'm sure it helps to have an audience as adoring and as eager to be delighted as the one I saw the show with: just about every number threatened to bring the house down; a couple of entrances and exits did, too. A little girl danced energetically (and impressively quietly) up and down the far aisle through much of act II. I knew how she felt.

So what if all the puppeteering, joking and lightheartedness results in a breezier, less emotionally impactful--or even clear--second act? I'm not sure exactly what was going on with the Witch's departure, and none of the characters grieve for more than a split second upon learning of the deaths of loved ones. No matter: We all know pretty damned well by this point that people don't always make it out of the woods. I'm certainly willing to trade a few muted moments for a consistent reminder that joy is like oxygen, that it's futile to feel guilt about seeking it out, and that a light touch can be a magical elixir for the weary, traumatized masses. That there can be moments of such unadulterated joy in the midst of so much awful is about as profound a reminder of why we soldier on in the first place.

Go. Have fun; I hope you leave feeling a little lighter than you did when you walked in.

Caryl Churchill is a remarkable playwright. She's smart and funny and political and personal and humane and moving and very very entertaining. Reading her scripts reveals that she is also a great collaborator: for example, for a funeral scene in Here We Go, part of the excellent Sex, Grift, and Death at PTP/NYC, she wrote a bunch of little speeches, unattributed, allowing the director to choose who says them and in what order. (In the fabulous Love and Information, done by NYTW some years ago, Churchill provided only the dialogue--no characters, ages, genders, locations, or situations--for dozens of short pieces.)

In another section of the exceptional Here We Go, Churchill provides the mere scaffolding of a play in a way that invites audience members to provide their own storylines and details. The resulting experience becomes extremely personal to each viewer. It is a tour de force of writing that consists of almost no writing.

Churchill is fortunate to have director Cheryl Faraone as one of the major interpreters of her work in the United States. We in the audience are fortunate as well. Faraone meets Churchill full on, mining her humor and emotion and giving us productions full of texture and clarity, perfectly timed, beautifully acted.

There are two Churchill works in Sex, Grift, and Death. The first, Hot Fudge, is a complete pleasure as it depicts a family of grifters whose daughter is discovering that honesty just might be a worthwhile option. Faraone has guided the excellent cast to perfectly calibrated, extremely funny performances. Particularly noteworthy are the fabulous Danielle Skraastad, whose every utterance has the audience hysterical, and Tara Giordano, who anchors the fun in reality.

The other play, Here We Go, is about illness, dying, and death. It is in three parts; the first and third are discussed above. In the second part, the versatile David Barlow plays a dead man trying to suss out just what death is. It's funny and thought-provoking and amazingly imaginative. It genuinely makes a person think about the meaning of life.

There's a third play in Sex, Grift, and Death, called Lunch. Written by Steven Berkoff, it deals with the sex part of the evening's title. A woman sits on a bench near the ocean, seemingly waiting for something/someone. A man appears--is he the one she is waiting for? The rest of the play deals with the answer to that question as they chat and spar and flirt and jockey for position. Their interaction turns sexy, thoughtful, and ugly in turn, and then back again. They are not named in the written script--just Man and Woman--though they are named in the play itself. Are they supposed to represent all men and women? Is the play about the striving of humanity for connection--or just for something to happen? With its occasional references to TS Eliot's The Love Song of J. Alfred Prufrock," the play clearly has something to say, but it is too wordy for a brief one-act; one would have to read it multiple times to digest what is going on.

Ultimately, Lunch is an interesting and often entertaining show, and it features some impressive writing. But to watch rather than read, it might benefit from some serious pruning. Bill Army and Jackie Sanders are both quite good (although Army could be slower and clearer in his long speeches).

Overall, Sex, Grift, and Death is a real treat. Welcome back to in-person theatre PTP/NYC. You were missed!

Posted by Wendy Caster at 11:10 PM No comments:

It is difficult to review Reverse Transcription, an evening of plays covering AIDS and covid, as theatre. The first piece, Robert Chesley's Dog Plays, is a story of despair and death written by a despairing and dying playwright. The second, A Variant Strain, written by Johnathan Adler and Jim Petosa as a continuation of the first, brings the AIDS-stricken main character into the days of covid. These plays depict deep pain, grief, and loss, and they are vivid reminders, if any are needed, of the tragedy of AIDS-related and covid-related deaths. I honor the emotions of these plays and I am sorry for everyone's losses.

However, and this is the dicey part, watching these plays was a deeply unpleasant, abrasive experience unmitigated by art or insight. The playwrights' anger lashed out at the audience, and I kept thinking, "What the fuck did we ever do to you?" Rather than inviting the audience in, the pieces put up blockades of blame and manipulation.

Attacking your audience with loud, endless speeches and unremitting rage is not good writing, at least in my opinion. (Though some of the speeches were truly excellent.) How about a little humor? Warmth? Likeability? Look at Angels in America, The Normal Heart, even Boys in the Band. There are genuine people in those plays, not just spewing mouthpieces. It was pretty much impossible to feel involved and sympathetic at Reverse Transcription, except for the brief scene shown above, where the admirable Johnathan Tindle brought a depth and sensitivity otherwise missing in the evening.

I agree that the shows' creators have the right to produce exactly what they want to produce. I agree that anger is a legitimate topic for theatre. I agree that AIDS was an unimaginably horrible agent of destruction. I think every day of my friends who have been dead half my life and all they have missed. But those plays being in the audience's faces for two hours added nothing to our existence or understanding and, well, cost us those two hours.

I realize as I write this that I was angry watching the plays and am angrier now. Maybe this means that Reverse Transcription was actually successful. I don't know. But I sure don't recommend that you go and see it.

Posted by Wendy Caster at 5:53 PM No comments: