The narration for the MasterVoices production of the Gershwins' Let 'Em Eat Cake mentions that (1) it was the very first musical sequel (to Of Thee I Sing), and (2) it set the precedent for musical sequels flopping (see, e.g., Best Little Whorehouse Goes Public, Bring Back Birdie, and Annie 2: Miss Hannigan’s Revenge). It failed, however, to include point (3), which is that the sequels mostly aren't as good as the originals (exception: Falsettoland).


It's not that Let 'Me Eat Cake is bad. It just isn't . . . good. The plot is all over the place, even for a silly satire, and Ira Gershwin is in full twee mode. (Complicated rhymes that don't quite make sense get boring quickly.) But, and this is a huge but, the score by George Gershwin is gorgeous.

And any show sounds terrific when presented by the 150-person MasterVoices and the Orchestra of St. Luke's, directed and conducted by the fabulous Ted Sperling. It's always a treat to see them perform. In addition, they generally have amazing guest stars. This time, the cast included Bryce Pinkham, Mikaela Bennett (delightful), David Pittu (stealing the show), Kevin Chamberlin, Christopher Fitzgerald, Fred Applegate, Chuck Cooper (wasted!), and Lewis J. Stadlen (mumbling through his one-liners).

It's a little odd to review MasterVoices shows, since they're always gone before the reviews come out. So let me predict that their entire season will be well worth seeing and leave you with a link to their website: MasterVoices.

Posted by Wendy Caster at 2:36 PM No comments: 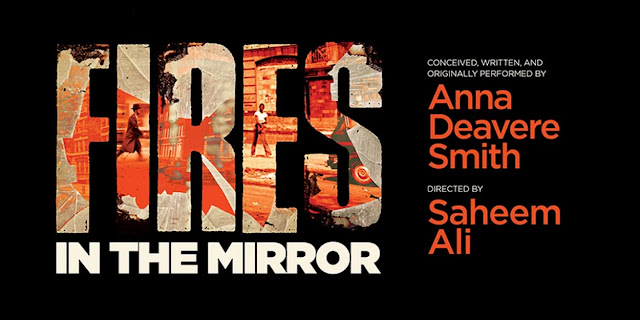 A mild stir went up at the initial announcement that Smith would not be performing her celebrated play this time around, but then, Fires in the Mirror very much deserves to live on whether she's involved or not. Michael Benjamin Washington holds his own in the Signature production, moving easily between characters with the lighting of a cigarette, the donning of a headscarf or hat, or the careful preparation of a cup of tea. Like Smith in the original production, Washington disappears into each of the many people he portrays, all the while keeping his own opinions off the table. Some of the people portrayed are angrier and less tolerant than others, and a few have especially strong--and not especially kind--opinions about Blacks, or Jews, or the incidents that sparked violence and rioting. But in letting them all speak for themselves--whether about the role of hair in black culture, complications that can arise during Shabbat, which cultural group has been treated most cruelly through human history, or who specifically was to blame for the violence in Crown Heights in summer 1991--Smith has created a quiet, moving, kaleidoscopic reflection on race, culture, and personal identity. While the riots at the heart of the production certainly took me back to that strange, sad summer, I found Fires to be, for the most part, curiously uplifting and even hopeful. Bias might occasionally slop over into violence and hatred, but then again, as one character muses, no matter who they are, most people want the same things: to go freely about their days; to experience more joy than pain; to live in quiet, peaceful neighborhoods; to get along with one another more often than they don't.
Posted by Liz Wollman at 3:48 PM No comments:

In the excellent Voyage Theater Company production of The Hope Hypothesis, running through November 15 at the Sheen Center, playwright-director Cat Miller deftly shows how easily innocence can be misread as guilt when the authorities involved neither understand the people involved nor care to.

The plot is simple: When Amena, a long-time resident of the United States, goes to a governmental agency to complete some immigration paperwork, the clerk freaks out at the flag on her birth certificate. She is soon caught in a bureaucratic nightmare that also ensnares her boyfriend and an ACLU lawyer.  Unfortunately, reality these days is scary enough that Miller needed to write only the smallest twists on reality to drag Amena into an insane and frightening world from which she may never return.

In addition to being tense and suspenseful, The Hope Hypothesis is funny, warm, and pleasingly clever. Its 75 minutes fly by. Miller and her excellent cast imbue potentially stereotypical characters with humanity (only the character of a dumb CIA agent fails to take life), and the characters' interactions ring true in a way that brings further dimension to Amena's adventures in Kafka-land.

The scenery, by Zoë Hurwitz, provides a coolly anonymous setting while also allowing quick and effective transitions into other locations. (I have a personal bugaboo about slow scene changes in multi-scene plays, but The Hope Hypothesis moves quickly due to Hurwitz's scene design and Miller's smooth direction.) The costumes, by Katja Andreiev, suit the characters, and the lighting, by Bailey L. Rosa, and sound design, by M. Florian Staab, nicely support the general sense of dread.

While we constantly hear about the insane prices of Broadway, it is important to remember that all over New York and the entire country, top-notch work can be seen for the price of a movie ticket, medium soda, and medium popcorn. The Hope Hypothesis deserves way more attention than it is likely to get in its short run Off-Off-Broadway, but you have a week to catch it before it goes.