Girl from the North Country

There's a lot going on in Girl from the North Country, Conor McPherson's play with songs by Bob Dylan that's running through the first week of October at the Old Vic in London. Set in a boarding house in Hibbing, Minnesota during the Great Depression, the piece features lost souls from various racial and economic backgrounds, who all have in common a restless, gnawing sense of spiritual unease. Among them are bighearted criminals, hypocritical men of the cloth, women unmoored from reality, estranged and embittered husbands, damaged children. The characters find themselves thrown together in a time and place during which they experience a wide range of intense emotions, from the purest joy to the most intense despair.

In brief, then, all the characters in Girl from the North Country are absolutely typical of your average Dylan song or McPherson play. 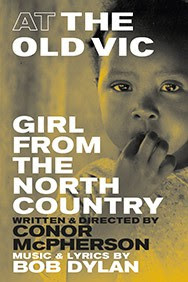 Say what you want about Dylan: he's notoriously strange, he was terribly rude to the Swedes, he looked ridiculous in that white makeup during the coke-drenched Rolling Thunder Review years. But he's clearly quick to recognize kindred-spirit artists, especially male ones, and to connect with them in his own weird way, even while maintaining his carefully cultivated secrecy. McPherson's recurring fascinations--with the divine, the devil, and the myriad poor suckers who get caught between them; with ghosts who soothe and those who torment; with the human condition as so much damaged goods--are remarkably similar to his own. This might be the reason that, some years back, Dylan apparently had his people contact McPherson to inquire about a collaboration of the kind only Dylan would suggest: he sent McPherson a complete set of recordings, gave him permission to use them as he pleased, approved a basic outline, and made it abundantly clear that he wasn't going to be stopping by rehearsals or lending any further input. 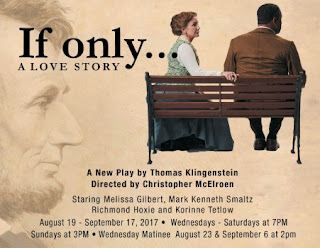 
Posted by Wendy Caster at 6:53 PM No comments:

The Suitcase Under the Bed

Playwright Teresa Deevy lived from 1894 to 1963. The youngest of 13 children, she lost her hearing in her late teens, roughly at the same time that her family's financial situation became much reduced. She used theatre as as a way to practice her lip-reading (she read the play first, when possible) and soon felt inspired to write plays herself. When she had trouble getting her work produced, she switched to writing radio plays. She went to mass every day, yet was critical of the restrictions placed on women by the Catholic church. The limited biographical information available does not mention any romance.

She must have been a fabulous lip-reader and an even better reader of people, as her plays are wise, subtle, and full of psychological insight.

If not for Jonathan Bank and the invaluable Mint, Deevy and her work might be unknown, which would be a big loss for audiences and theatre history. Bank has not only revived Deevy's work; he has also been instrumental in tracking down copies of lost plays. Bank's latest evening of Deevy's work, The Suitcase Under the Bed, features four one-acts that were found in the titular location.

Waiting for Van Gogh's Ear to start is a pleasure, since it gives you time to really examine Vanessa Jame's open and elegant set. It's all black and white, with dramatic strips of wide glistening material stretching down walls and across the floor. The upstage center area, arranged for musicians, is dominated by a striking white grand piano. Stage left features a small room, a pared-down version of Van Gogh's famous bedroom.


Soon the show starts, and the black-and-white set swirls with color as the white bands become screens for stunning projections (David Bengali) that envelope the audience in Van Gogh's gorgeous brush strokes.

READ MORE>>
Posted by Wendy Caster at 3:33 PM No comments:

Humorless buzzkill that I am, I've never been a big fan of the 1993 movie Groundhog Day, even though just about everybody else on the planet seems to think that it's one of the most brilliant comedy films ever made. Also, while I appreciated the stage adaptation of Matilda, and found its Tim Minchin score inoffensive, that musical, too, ultimately left me kind of tepid, if not utterly cold. For both of these reasons, I've been a little slow in getting around to seeing the Broadway musical version of Groundhog Day, which is Minchin and director Matthew Warchus's followup collaboration.


I can't say I loved every minute of the musical, or that it totally changed my life, or even my opinions about the musical version of Matilda or the film version of Groundhog Day. But I certainly enjoyed it. It has a lot of strengths, and at least one number that I haven't stopped thinking about. Sure, there are weak links: the set and sound are both a little murkier than they should be at various points, and the whole production came off as a little too darkly lit. The first act gets a little bogged down with a lot of exposition and the constant repetition that's part of the fabric of the plot. And many of Minchin's lyrics and melodies just don't stick with me, even after repeated listening (truly, I tried).

But the cast is strong and committed. The car chase, done with little car puppets and black light, made me laugh, and there were some excellent stage tricks during the suicide attempts. And if you have never seen Andy Karl on stage, you're missing out. As Phil, the arrogant and condescending weatherman who learns to be a mensch by the end of the show, he's endlessly appealing. In everything I've seen him do, I'm newly struck by how gifted Karl is both as a verbal and physical comedian. Here, his talents and his charisma are put to excellent use, especially since he walks the same fine line Bill Murray managed so well in the film (and just as a general proposition): Karl's Phil is never enough of a smarmy, insufferable dick that you genuinely hate him, but he's just enough of one that his gradual transformation and self-actualization into a reasonably good guy remain consistently engaging.

Then there's the wonderful "Playing Nancy," which pretty much made the musical for me. Performed at the top of the second act with absolutely no fanfare by a secondary character who previously has been fooled into sleeping with and subsequently dismissed by Phil, the piece is beautiful, delightfully meta, and astoundingly forthright in its commentary. I loved it, I haven't stopped thinking about it, I listen to it often and fondly. Thanks, Tim Minchin. You might not be my alltime favorite Broadway composer, but with this song, you've earned my respect. Hats off to you for considering, even momentarily, the roles women play in the most heralded and blockbustery and revered of mass entertainments, which are ultimately and almost always about men--and for writing a song that doesn't flinch, pander, or condescend. I'd make like Bill Murray and sit through all of your future musicals twice in a row, anytime, as long as you keep writing songs like this.

Posted by Liz Wollman at 4:16 PM No comments:

I was not a huge Barbara Cook fan. It would never occur to me to play a CD of hers. I certainly didn't consider her the premiere cabaret singer ever or the best interpreter ever.

Yet every time I saw her, she blew me away. (And, obviously, she was one of the best.)


I saw her three times: at the Vivian Beaumont; at Feinstein's when it was still at the Regency; and giving a master class at Cooper Union.

There's nothing I can say about her singing that others haven't said, and better than I could. But I do want to talk about two things: her skills and generosity as a teacher and her grace as she dealt with the changes of aging.

At the master class, Cook was faced with students with gorgeous voices and limited interpretation skills. She told them that they didn't have to show us that their voices were wonderful, because we could hear that. And then she focused on what the songs were about. And little by little, the students would go from making beautiful noises to telling stories (while still, of course, making beautiful noises).

One young man just couldn't loosen up. She gave him all sorts of suggestions and tips, but he couldn't let go of the formality of his singing. Finally, she pulled over two chairs for them, and she faced him and held his hand. "Just sing to me," she said. "Just tell me." It was a lovely, lovely moment. I don't even remember if the young man ever really let go. But I won't forget her generosity, openness, and willingness to put herself on the line.

(I also won't forget that the one student who really impressed her was the one I liked least. Go figure.)

When it came to aging, Cook turned loss into humor. At Lincoln Center, she sang a glorious "Glitter and Be Gay." She didn't have the high notes, and she didn't try to. Instead, when it was time for the pyrotechnics, she put on a tape of herself singing the song years ago, and spent her time donning all of Cunegonde's rings and necklaces. It was funny, touching, silly, and wonderful.

At Feinstein's she was no longer able to navigate the steps to the stage. Her solution? Get two hunky men to basically lift her into place as she joked and laughed. Again: funny, touching, silly, and wonderful.

Somehow, Barbara Cook managed to combine goddess and gal, lady and broad. And, yes, she was a heck of a singer.