Sometimes--maybe especially when the whole world is screaming and sad and broken--a not-very-good musical can be the perfect balm. On Broadway at the Longacre for a few more days before it shutters, Diana The Musical remains the not-very-good production it was on film, though I'd argue that the stage version is vastly superior to the Netflix debacle that dropped this fall. I've been pretty jokey about the show, but I've also grown weirdly attached to it. I've long harbored a large place in my heart for stage musicals that don't quite work despite the time, energy, hope, labor and money that get poured into them. I think I've connected with Diana as well because of all the things it tries and does not manage to be in this exceedingly weird time and this thoroughly damaged place. Yes, sure, Diana is culturally irrelevant, dramaturgically sloppy, unsure of what tone it is supposed to take, and saddled with ridiculous lyrics. It doesn't ever do much more than shine, glimmer, pop, and blare at top volume. Is it a little backward, a little sexist, a little heavy on the visuals, and a lot short on any perceptible message? Oh, you bet your ass. Then again, I'm sad and anxious and frustrated and exhausted and enraged all the damn time lately, so I just don't have the time or energy it takes to get even the teeniest bit riled up about....Diana The Musical. The show has become, at least for me, a delightfully, garishly wonderful distraction from right now, and I find I am deeply grateful for it--jewel-encrusted warts and all. 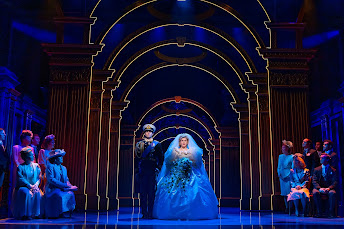 Unlike like the Netflix version, which was comparatively ponderous (and which I thus consumed in multiple minutes-long excerpts over a few weeks), the stage production swirls, gyrates, rotates and swings in and back out again at a remarkable clip. The show still doesn't make much sense, even with a few improvements in the form of some new exposition about the existence in the show (and in general) of Barbara Cartland, a bit more attention to Diana's struggles with postpartum depression and self-harm, and even more scenery, set-pieces, and shiny stuff to look at. The people of Wales are no longer dressed like chimney sweeps--they instead wear an enormous amount of tweed; lest they get confused with other tweed-wearing populations, there's now a huge new sign dangling above them that spells WALES in huge wrought-iron letters. The AIDS scene remains genuinely touching, even if the ward it takes place in still makes its patients sit around in a large circle on folding chairs. Judy Kaye as Queen Elizabeth is still in an entirely different show, though her Barbara Cartland is slightly campier now, as is Diana's butler. Try as I might, I cannot and likely never will figure out what "a lonely girl aswirl" means. And Diana's death scene at the end of the production remains utterly pointless and tacked-on. But then, that's cool with me given all the actually traumatizing, genuinely sad, enormously relevant death happening right outside the doors of the Longacre.

A live audience makes a world of difference, especially compared with the cavernously weird film that was shot without one. At the performance I attended, the spectators were kind, supportive and clearly eager to be entertained, even as they frequently erupted in hoots, hollers and applause at some of its clunkier moments, and the occasional jeer (I assume Roe Hartrampf, as Prince Charles, expects to be called an asshole at least once a performance at this point). Even as the James Hewitt scene fell flatter onstage than it did on film (dammit!), the number about the fuckety dress so delighted the crowd that its--um--lyrics were hard to hear at points. Diana may still be made up of about 50 different puzzles, some of which are missing half their pieces because the dog ate them. But the pieces that have made it into the mix sure are pretty. And as an added bonus, none of them will end up killing you.

I've said it before, but it needs to be said again: absolutely enormous kudos to the company. To a one, the cast is professional and hard-working, but not so much that they can't be in on the joke. Not a one broke character or came off as if they were phoning it in, and a significant number seemed to be having as good a time as the audience was. I hope very much that they were. I also hope that every single one of them moves on to other, better projects--and that, in the meantime, they have all become dear friends who go out together and drink and laugh and bond over their strange situation, performing mid-pandemic in a show that dips and soars into mawkish melodrama, keeps its distance from the current moment, and functions as a true distraction in a historic stretch where precious little diverts.