Benjamin Franklin said that nothing is certain but death and taxes. However, he left out another important certainty: when MasterVoices puts on a show, it is always worth seeing.

Carmen, which MasterVoices recently presented, is a case in point. Although a concert production, it was fully performed, with top-of-the-line soloists, the excellent Orchestra of St. Luke's, enough costumes to set the scene and the mood, dancers, and that fabulous 120+ person chorus. Ted Sperling, MasterVoices's artistic director and general all-round gift to New York, led a lucid, energetic performance of the original Paris Opera Comique, with lyrics by Sheldon Harnick. It was a truly delightful evening, except for one thing. And that thing is not the fault of MasterVoices--it's Carmen itself, going back to the novel by Prosper Mérimée.

Carmen (beautifully sung and acted by Ginger Costa-Jackson) could not be more open about who she is and what she wants. She explains, clearly, that the most important thing to her is freedom. She adds, in paraphrase, "If you love me, I won't love you. If you don't love me, I might love you. If we love each other at the same time, boy, are you in trouble." This is not a woman who wants to settle down. So, as occurs in about a million books, operas, and shows, after Corporal Don José, madly in love with Carmen, cannot force her to "be true" to him, he calls her a whore and kills her.

Yes, the piece is of its time. Yes, it's just a show. Yes, people are spending too much time focusing on trees rather than forests these days. I get it! But, the bottom line for me, and for the friend I saw the show with, is that, yet again, we see a woman killed for not being who a man wants her to be. And Carmen is a fabulous vibrant character. She kicks ass. I wish she had kicked Don José's.

But it was a great production.

It always frustrates me that MasterVoices performances come and go so quickly, and that I can't tell you in time to make sure to catch them. But, since it's pretty much certain that their upcoming shows will be at least worthwhile and possibly wonderful, click here to get more info and perhaps tickets for the rest of their season.

Posted by Wendy Caster at 5:08 PM No comments: 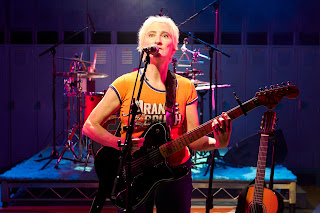 It's a delightful trip, despite some dips into sadness and even despair. In many ways, Sobule's life pivoted around her hit "I Kissed a Girl." It was the nineties, and she succumbed to pressure to treat it as a "novelty song" rather than the lesbian anthem it is. In a way, she broke her own heart by not standing up for herself.

But she also grew up, and embraced herself and her music. She is really funny (the excellent book is by Liza Birkenmeier, but the voice is sheer Sobule), and her songs are wonderful musical short stories. Most importantly, the show takes place in the sweet spot where the specifics of an artist's particular story expand into universality. Really, how many people enjoyed 7th grade? (If you did, by the way, you still would probably like the show. But you won't be in the majority in the audience.)

The show could use more of a transition between Sobule singing "I sold my soul, and nothing happened" and her response to Katy Perry's different "I Kissed a Girl." All we are told is that years passed, and that Sobule found herself feeling that, although she had somewhat disowned the song, she was the "I Kissed a Girl" girl! Also, F*ck7thGrade ends three times, and the last song is one song too many. (That last song shouldn't be played for anyone under 50, or even 60, with its list of potential--and realistic--ways the world may go to hell; I saw the show with a 28-year-old, and that's way too young to be told that it's okay if everything comes to an end because you've had a "good, good life.")

Now that I've finished the "I'm a reviewer" part of the review, I need to add the "I'm a lesbian of Sobule's generation who has had her CDs for years" part of the review. For me, much of F*ck7thGrade felt like catching up with an old friend. When "I Kissed a Girl" came out, my friends and I were thrilled. I managed to tape the music video (on BetaMax!) from TV, and that tape was passed around to friend to friend to friend. We assumed that the enforced heterosexuality of the ending of the video (Sobule and the woman she kissed are shown pregnant by their loser men) was not Sobule's choice, and we had no doubt that Sobule was one of us. It's sad to hear how much pain the whole thing caused Sobule, because that song and that video were major gifts to the rest of us. Honestly, in 1995 the song felt miraculous. (I dealt with that awful, stupid, tagged-on ending by simply pressing "stop" before it came on.)

Even now, in 2022, movie, TV, and theatre characters that I can truly identify with are rare. Watching F*ck7thGrade gave me that unusual, wonderful sense of being seen, of being. That's a real gift.

The show runs through November 8. You can get tickets here. I hope you do.

Leopoldstadt, Tom Stoppard's newest play, and possibly his last, offers a journey through the life of a Jewish family in Vienna, from 1899 to the 1950s. They are well-off and mostly happy. Some have married non-Jews (Protestants, to be specific, although the matriarch of the clan persists in calling them "Papists"). While not specifically based on Stoppard's family, it is clearly an outgrowth of his later-in-life discovery that his mother was Jewish and that most of her relatives--most of his relatives--were killed in the Holocaust. 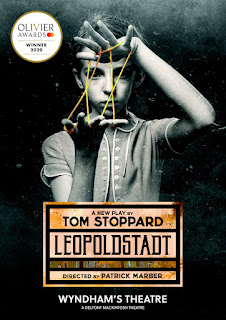 Leopoldstadt may be Stoppard's wordiest play, and that is saying something. It may also be his least play-like play. In the majority of scenes, two people disagree about an issue involving the Jews. They argue their points, lading their conversation with a tremendous amount of history. Stoppard makes this remarkably compelling, particularly for a Jewish audience. (I am an ethnic, nonreligious Jew whose family came to the US well before World War II.) Few of the scenes feature action of any sort; they are the best in the play.

Overall, Leopoldstadt is a history lesson, largely ignoring the admonition to show, not tell. But it's elegantly written by Stoppard, smoothly directed by Patrick Marber, and well-acted by a large cast. And the final scene brings the show home with power and emotion.

The show has been called a masterpiece, and I respectfully disagree. I don't think I'd even put it in the top five of Stoppard's plays. But, for all its flaws, it's a Stoppard play. With occasional sparks of his genius. And it's possibly his final play. That makes it a must-see in my book.

Posted by Wendy Caster at 4:16 PM No comments: