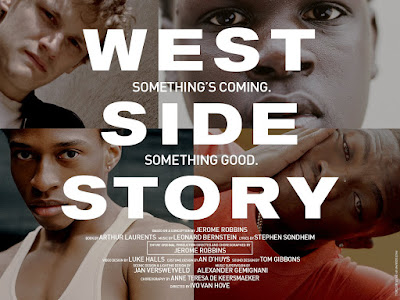 Posted by Liz Wollman at 9:48 AM No comments:

I saw a very early performance of Coal Country, so this is a brief report rather than a review.

Coal Country is a documentary theatre performance developed by Jessica Blank and Erik Jensen, the creators of Exonerated (about people wrongly convicted of capital crimes) and Aftermath (about Iraqi refugees). As with their other shows, Coal Country relies on the words of the actual people whose stories are being told--in this case, coal miners and their families--giving it a vivid and sometimes heart-breaking immediacy. In addition, Coal Country features songs written and performed by singer-songwriter Steve Earle.

Coal Country runs through March 29 at the Public Theater.
Posted by Wendy Caster at 4:08 PM No comments:

The Transfiguration of Benjamin Banneker

Who was Benjamin Banneker? According to Skipitares' directors notes,


An 18th century descendent of an enslaved man, [Banneker] was a self-taught astronomer who made historic discoveries at his homestead outside Baltimore.

Banneker’s role in developing the American scientific enterprise has been largely passed over since his death... Banneker’s position in 18th century American culture marked the first time that white society had to openly acknowledge an African American’s discoveries. Yet Banneker’s correspondence with a sympathetic but fundamentally indifferent Thomas Jefferson showed the limits of the recognition that African Americans could expect from official society.

Skipitares chooses to explore--no, celebrate--this story through drumming (by the incredible Soul Tigers), music (by LaFrae Sci), dancing (choreography by Edisa Weeks), narration, and fabulous puppetry. (As with many good things, it takes a village; see credits below.) The result is sometimes sad, often joyous, frequently funny, fascinatingly informative, and generally entertaining.


As I watched the show, I was reminded of a jazz musician's quote I read years ago. Unfortunately, I wasn't able to track it down, but to the best of my memory, he said that jazz wasn't just about the song--it was about how he felt about the song. Similarly, while The Transfiguration of Benjamin Banneker is indeed about Banneker, it is also about how Skipitares and the rest of the people involved with the show feel about Banneker, and also about science, TV, the role of race in the United States, space travel, and other themes.

I had some complaints here and there. The narration sometimes jumps confusingly around in time; the visuals don't always match the words (eg, at one point someone was reading a letter written by Banneker but the visual was a letter written by Thomas Jefferson), and I personally would have enjoyed more story and less drumming. But overall, The Transfiguration of Benjamin Banneker provides a concentrated hour of excellent performance, as well as an introduction to a man we all should have learned about in school.


***
The Transfiguration of Benjamin Banneker