Standing on the Edge of Time

The Potomac Theatre Project's recent streaming play, Standing on the Edge of Time, consists largely of people talking--alone, in pairs, or in groups--about  history, theatre, relationships (romantic and not), and meaning. Each segment is by a different playwright or poet, resulting in a pleasing and thought-provoking verbal kaleidoscope of words and ideas. (I've provided a list of the shows represented below.) With many young people in the cast, the show sometimes feels like groups of college kids got together for slightly buzzed, totally heartfelt, 2-a.m. discussions. I frequently wished I could join them. 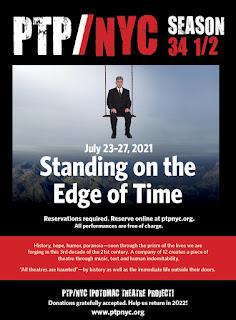 Rather than discussing the individual segments, of which there are almost 20, I offer some of the lines that stood out for me.
One of my favorite lines comes from "What Do You Believe About the Future?" by David Auburn. After around a dozen people make their predictions, some of which are in the list above, a young man says, "I believe I will get a date."
Two points: (1) I wish I had been able to see this in a theatre. (No shit, huh?) I am much better able to sink into the mood and pacing of a word-driven piece like this in a dark theatre than in my studio apartment. (2) I really wish that the pieces had been identified as they started. I completely get why director Cheryl Faraone would not want to interrupt the flow of discussion with title cards or captions, but not knowing was problematic too. I was sometimes distracted by thinking, for example, "Wait, I've heard that before. Is that Kushner? Churchill?" And then I was distracted by thinking, "Wow, I really should be able to distinguish the voices of such individual playwrights." (The only author I identified with no problem was Ntozake Shange; she truly sounds like no one else.)

Faraone forestalls the inevitable Zoom-ness of streaming plays with an appealing, overtly theatrical opening including atmospheric shots of an old theatre and a ringmaster sort of person discussing exactly what theatre is ("Like the inside of a human heart. Only bigger, and not as empty."). When sections do have the dreaded Zoom-like boxes, Faraone uses interesting angles and various other devices to provide variety, plus a few sections are shot outdoors.

It is unfortunate that this show is already gone, but Potomac has one more show this season. A Small Handful is based on the poetry and life of Anne Sexton and utilizes speech, song, and performance to "discover something about the endurance of Anne Sexton’s complex journey." It runs August 13 to 17; more information can be found here.

The plays and poems of Standing on the Edge of Time.

Next Time I'll Sing to You by James Saunders

The Enemy by Mike Bartlett

Excerpts from "Strange Days Indeed: The Golden Age of Paranoia" by Francis Wheen

Tales of the Lost Formicans by Constance Congdon

Spell of Motion by Stacie Cassarino

What Do You Believe About the Future? by David Auburn

Tickets Are Now on Sale by Caryl Churchill

In Perpetuity Throughout the Universe by Eric Overmyer

Mornings at the Lake by Stacie Cassarino

The Internet is Serious Business by Tim Price

Posted by Wendy Caster at 11:05 PM No comments: