Bette Midler and Dolly Levi would seem to be as perfect a match as, oh, Glenn Close and Norma Desmond or Angela Lansbury and Mame. But, rather than giving us Dolly Levi, Bette has chosen to give us . . . Bette. Yes, she's funny and charming and lovely, but Dolly Levi is missing. Still, Bette does the star thing as no one else can, and the audience adores her. And she rocks the red "Hello, Dolly" dress and feathers. (Also, I saw a preview, and perhaps her performance will deepen.)

I would have thought that not loving Midler would have meant not loving Hello Dolly, but I had a great time. Dolly is an old-time Broadway Musical, and this production beautifully captures its size, sweetness, and silliness. The book, by Michael Stewart, does what it needs to do, with some great silly jokes. The score by Jerry Herman is uneven, but the highlights are indeed highlights. It's also a pleasure to look at. The sets and backdrops are colorful, attractive, and full of detail. I could spend hours in Horace Vandergelder's and Irene Molloy's shops just enjoying the craft and artistry of the designs. The costumes are yummy eye candy, and there are a lot of them. Both the scenery and costumes are designed by the great Santo Loquasto, who has been delighting theatre and movie audiences for decades.

READ MORE>>
Posted by Wendy Caster at 1:44 PM No comments:

I won the lottery for Sunset Boulevard last Sunday matinee. The tickets were $55 each. I was thrilled when the box office woman handed me C2 and C4 in the orchestra. While they're arguably "partial view" seats--one corner of the stage simply cannot be seen--they're first row, which I love.


I'm beginning my review with this information because the seats and the price I paid both greatly increased my enjoyment of Sunset Boulevard. I haven't yet spent $299 or more for a theatre ticket--and I don't know that I ever will--but paying such a large amount of money has to influence a person's response to a show, whether for good or ill.

The show just isn't that good. Most of the sections that focus on Norma, Joe (Michael Xavier), Max (Fred Johanson), and Betty (Siobhan Dillon) are strong, particularly as played by this excellent cast. But the parties and other filler scenes are tedious. Many of the songs are indistinguishable from each other and dozens of other Lloyd Webber creations. The choreography is lame. The scenery is limited and uninteresting. (However, the large orchestra is fabulous.)

If you can win the ticket lottery, I recommend Sunset Boulevard. If you're someone for whom $299 isn't a lot of money, go ahead, give it a try; Glenn Close is really something. But if that's a lot of money to you, as it is to me, and you're not Glenn Close's biggest fan, stay home.

Best Worst Thing That Ever Could Have Happened

Best Worst Thing That Ever Could Have Happened, Lonnie Price's documentary on the making of Merrily We Roll Along, is jammed with treasures, such as footage of auditions, rehearsals, and performances from the original production and then-and-now interviews with members of the original cast. What a disappointment, then, that it's not a particularly good movie. 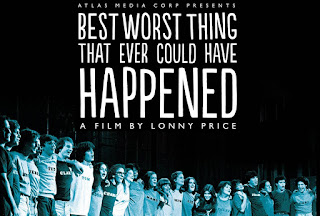 It might have hit me differently if I knew less about Merrily. But I know a lot about it, and I was annoyed by what the documentary left out. For example, at one point the movie refers to the successful productions after the original disaster. But no one mentions that it was extensively rewritten. I was also annoyed that so many cast members were barely mentioned or not mentioned at all. Surely it's worth a few seconds to acknowledge the presence of Liz Calloway and Giancarlo Esposito? It certainly would have been a better use of the movie’s precious minutes than the cliché shots of spooling film and of Manhattan that Price uses instead.

946: The Amazing Story of Adolphus Tips

Kneehigh's stage adaptation of the 2006 children's novel The Amazing Story of Adolphus Tips by Michael Morpurgo is so bubbly, energetic, and wacky that a few times during the performance, I was surprised by how suddenly I found myself choking up.

Told largely from the perspective of the feisty, funny, endearingly odd 12-year-old Lily (and, at the beginning and the end, her equally engaging elderly self), Adolphus Tips revolves around a search for the lost cat of the title. But since the setting is coastal England during World War II, and since the cat very quickly becomes a symbol for so many other kinds of absence--that of fathers and sons, of safe spaces, of food and supplies, of peace, and of a general sense of well-being--the production is ultimately a lot weightier than it can sometimes seem. Never heavy-handed or overwrought, Adolphus manages to tell a gentle, genuinely moving tale without cutting back on the clowning, drag, broad humor, folksy music, and energetic dance.

READ MORE>>
Posted by Liz Wollman at 1:53 PM No comments:

The Sam Gold-helmed version of The Glass Menagerie isn't for everyone (as you can see by reviews  here   and  here  ), but this stripped-down version of Tennessee Williams' 1945 memory play shouldn't be entirely discounted.

The bare bones set with its black exposed walls gives a bit of a shadowbox feel that belies the open space and surrounds the actors with an ever-present shroud of darkness. A rack piled with props, like dishes, sits close to a metal kitchen table and orange chairs. A neon sign blares "Paradise Open" in green and red. Though stark and jarring at first, the look mimics memory -- etching out the most enduring details with the rest fading into background. It somewhat echos the look of Fun Home, which Gold won the 2015 Tony for Direction of a Musical, where a bed, a desk, a piano also isolate moments of the narrator's recollection rather than sweeping scenery.

The Glass Menagerie's casting is unusual. First, Joe Mantello, with his grey-infused mop, is a few years past his early 20s, Tom's age as the play opens. With the 2013 revival, where Zachary Quinto received rave reviews (the New York Times called his performance "career-defining") still fresh, seeing a middle-aged Tom initially feels disconcerting. Still, the older Tom's viewpoint takes the audience into Tom's current perspective -- we feel his angst more deeply as we look at the man he's become rather than the remembrance of the boy he was.

Then there's Madison Ferris making her Broadway debut as Laura, the first wheelchair user to perform a major role on the Great White Way. Williams' own description of Laura states, "A childhood illness left her crippled, one leg slightly shorter than the other, and held in a brace. . ." So amplifying the character's disability alters the play tremendously. As the play begins, this intensification provides distraction. Watching Ferris manipulate her body, inching it in an elaborate effort as she moves from chair to floor and back, takes the audience from Tom's world into Laura's. I missed lines as I watched her arduous maneuvers.This casting choice reinterprets Williams' vision and, to me, gives Laura a strength I haven't seen in any other version. Yes, Laura is still fiercely reclusive and awkward, but not fragile. The fortitude she displays in her day-to-day physical challenges gives Laura depth as a character. Her fascinations -- her crystal creatures and old-fashioned music -- become a way to find beauty in a difficult world rather than mere hiding places. Her condition forces the characters to interact with her physically as they help her move: their motions become awkward, too, as in the first scene where Sally Field carries Laura's folded chair up the stairs. At times, this makes the production clunky, but it also weaves an acutely tangible love into their actions.

The truth is Williams' stage directions don't always work. The first time I saw The Glass Menagerie on Broadway in 1994, with Julie Harris as the genteel Southern belle and Calista Flockhart as Laura, Kevin Kilner as the Gentleman Caller and Zeljiko Ivanek as Tom, director Frank Galati chose to use Williams'  original stage directions calling for "slides bearing images or titles" and periodically projected words such as "The sky falls" on the stage, interrupting the magic of the unfolding scene.

But reinventing a classic does have its pitfalls and the current version's deviations do lessen the impact of Tom's journey. The stark set doesn't include a fire escape and Tom's musings where he dreams of another life get lost in the dark apartment. The production puts everyone in more contemporary clothing even though their dialogue is obviously from another time. That's disconcerting, too. At one point, Sally Field twirls out in a cotton-candy froth of a dress, aping girlishly in front of the Gentleman Caller (a charming Finn Wittrock) and she looks nearly clownish in a caricature of someone clutching to her youth.

In general, Field's Amanda seems too young and soft, more beguiling than strident, and it changes her interactions with Laura and Tom. She simmers with anger -- her disappointment in life festering in her restless hands and arms. But the character never turns hawkish and the relentless commentary that drives Tom away and Laura inward sounds more annoying than invective.

There's also that pointless rain -- a sudden downpour that leaves puddles on stage. So much so, that the actors are forced to step over them. Yet, another distraction. Ultimately, Gold plays with transformation in this production too much, forgetting what story he is telling until The Glass Menagerie loses some of its potency.


Posted by Sandra Mardenfeld at 1:56 PM No comments:

By the time you read this, the York Theatre Company production of Dear World will be over. Part of the York's Musicals in Mufti series (their version--in many ways better--of Encores!), this production was a total delight. Tyne Daly took the lead role of Countess Aurelia, and she was nothing short of magical. I've read complaints here and there about the limitations of her singing, but superb, funny, subtle, heart-breaking acting transcends perfectly hit notes. (Isn't this why people are paying $299 to see Glenn Close in Sunset Boulevard?) And, yes, Daly was superb, funny, subtle, and heart-breaking.


The show itself was much better than I expected. It has a mediocre reputation, but as a mood piece, it's quite good. And the plot is depressingly timely--a bunch of rapacious businessmen want to blow up Paris to get to the oil underneath. They have more money than they could ever spend; their actions would kill hundreds of people and destroy the lives of thousands more; they don't care. They just want more money and more money and more money. In the terms of Dear World, greed is a disease. In the terms of our present, as corporations blithely destroy the wilderness and people's water to squeeze out every penny of profit they can, yes, greed is a disease.

READ MORE>>
Posted by Wendy Caster at 7:15 PM No comments:

All the Fine Boys

From public/political discussions and debates, you might think that sexual boundaries between adults and minors--and sexuality itself--are clear, defined, and unambiguous. They're not, as vividly depicted in Erica Schmidt excellent and disturbing (and surprisingly funny) new play, All the Fine Boys.


Emily and Jenny are 14-year-olds in South Carolina in the 1980s. Emily is a relative newcomer; Jenny grew up here. They watch horror films together. Their conversation focuses on middle-school gossip, along with life, adulthood, and sex, about which they know little but would like to know more. Emily's home gets covered in toilet paper every weekend; the perpetrators and their reasons are unknown. She feels overwhelmed by her new boobs. She is smart. Jenny seems a bit lost. She lies for no reason. She says, "You know sometimes I lie down in my driveway and I let the fire ants bite my arm." (Emily changes the subject pretty quickly.)

READ MORE>>
Posted by Wendy Caster at 9:08 PM No comments: