If you follow the musical theatre world on Twitter or Tumblr at all, you may have noticed an explosion of the hashtag - #BroadwayCon. This past weekend (January 22-24), the first annual convention dedicated to fans of musical theatre was held at the New York Hilton Midtown. The show went on despite Winter Storm Jonas. I had the chance to attend because my health insurance company issued me a shiny refund for exercising regularly (Thanks, Obama!). Here’s what I thought.
READ MORE>>
Posted by Aya at 11:30 AM 1 comment:

To Stay or Not to Stay: That Is the Question

My latest Art Times essay is up:

Every now and then, a controversy breaks out about leaving shows during intermission. Is it fair, acceptable, reasonable, and/or kosher?  (read more)

Posted by Wendy Caster at 2:13 PM No comments:

A short time into the future, Queen Elizabeth has died, and Charles is king. Lacking his mother's presence, popularity, and willingness to play the game, he initiates a national crisis by refusing to sign a law limiting freedom of the press. His stance is surprising--after all, his life has been severely affected by the depredations of Britain's rabid tabloid press. But Charles believes in freedom.

Playwright Mike Bartlett is smart to choose this particular law. How admirable that Charles chooses principle over his own comfort and the comfort of his loved ones! Bartlett also wisely shows us that Charles genuinely loves his family and does the best he can for them.

These positive feelings toward Charles are important as his behavior becomes more and more extreme, and his worthiness as a person and a king gets called into question.

READ MORE>>
Posted by Wendy Caster at 4:30 PM No comments:

David Bowie's death hasn't suddenly made me like Lazarus any more than I did when I saw it, but it sure has put me in touch with the power of collective mourning. Over the past week, I've listened to, watched, read about and thought about Bowie to an extent I can safely say I haven't before, ever, and probably won't again. Of course, I am hardly alone on this. After the surprising, sad announcement of his death from cancer at the weirdly young (if appropriately sexy) age of 69, Bowie has been the subject of myriad Facebook pages, Twitter feeds, hastily amassed comments from other famous people, encomia by arts journalists, and viral videos by people around the world who loved his music (or could, at least, strum some guitar chords and sing "Space Oddity.").

The outpouring of collective grief over celebrities who die is occasionally the subject of great concern, especially in the media age, many aspects of which seem to be cause for great concern by many people, most of the time, anyway. Among other bad things the Internet has done, apparently, is ruin our ability to mourn privately, appropriately, and without histrionics. 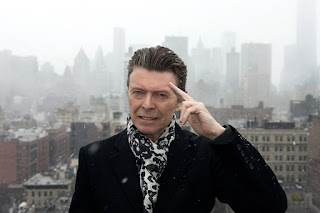 I tend to disagree with arguments about how the Internet is ruining us as a civilization; I certainly pissed away as much time as I do now long before the web was a thing. And I certainly don't see reason to get concerned about the ways we use it to mourn collectively. Maybe this is because so much of the work I do is solitary, and social media reminds me that I exist in the world even when I haven't looked up from whatever it is I'm doing in silence and solitude for hours at a time. I like being reminded at the click of a mouse, especially during dark times, that many, many other people are busily processing the same sociocultural information that I am. There are all sorts of ways to use the Internet for evil, but collective mourning, as I see it, just isn't one of them.

Anyway, mourning David Bowie--or any celebrity, really--is never just an internet thing, though there were an overwhelming slew of posts, comments, references, videos, parodies, and clips from television shows and movies--all of which seem to have made a lot of people feel connected in their surprised sadness. Beyond the Internet, too, it was also all Bowie all the time this past week: his music has emanated from countless bars and restaurants and open mics; his song lyrics and pictures were posted on any number of public spaces; the impact of his incredibly multifaceted career was the topic of countless conversations; and many performers opened or closed their concerts with tributes to him.

And for good reason, I think. Bowie, perhaps more than any other celebrity to give up the ghost in recent years, was a great and kind unifier; for all his shifting personae and his increasingly well-guarded privacy, his work repeatedly reflected an understanding of how it feels to be an outsider seeking connections with other outsiders. It's why, I think, so many people loved him, followed him, felt a kinship with him, discovered themselves through him. He was, no matter what the guise, ultimately an unsure alien eager to be reassured and loved during his time on earth. Aren't we all? His carefully cultivated aura--that of an absolutely beautiful, impeccably stylish everyman who nonetheless just might stay up all night long being self-destructive, doubting himself or others, or worrying about the same sorts of stupid shit we all stay up all night long worrying about sometimes--is what unites us in sorrow and celebration. It's sad that he's moved on, especially at an age that seems remarkably young by contemporary standards. But as one Internet meme that has circulated during this most thorough and heartfelt collective mourning process reminds us, it's pretty cool that we got to live in the world with David Bowie at all.

It's fitting that Marilyn Maye ended her recent show at the Metropolitan Room with "The Secret of Life" followed by "Here's to Life," since she clearly lives by both songs. At 87, she's dynamic, funny, charming, inspiring, and, yes, full of life. And she's a hell of a singer. She also looked fabulous, dressed in black with all sorts of sparkly additions. Every time she moved, she threw off light. But she could do that without the sparkles--that's Marilyn Maye! 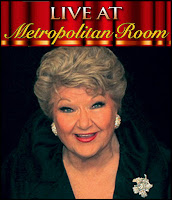 
See her whenever you can, as often as you can.

Maye's set included a wide range of songs, many tucked into elegant medleys. They included "I Love Everybody," "Let There Be Love," "It's Love," "Hey Old Friend," "I Love Being Here With You," "Cabaret," "That Face," "Whenever I See Your Smiling Face," "I Was Born to Make You Happy," "My Romance," "Golden Rainbow," "Fifty Percent of Him," "If I Were a Bell," "Luck Be A Lady," "Joey, Joey, Joey," "Bye, Bye, Country Boy," "I'm Through With Love," "What Do You Get When You Fall in Love," "Rain," "Sit Right Down and Write Myself a Letter," "Ain't Misbehavin'," and "Honeysuckle Rose." Like I said, it's a generous performance. (Please forgive any misnamed songs; I'm not 100% familiar with all of them.)

READ MORE>>
Posted by Wendy Caster at 4:56 PM No comments: