My latest review is up at Talkin' Broadway. 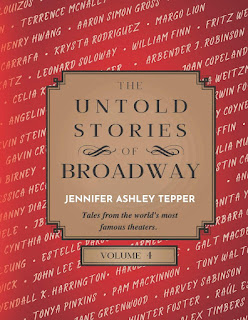 According to their interviews in The Untold Stories of Broadway: Volume 4, Ed Dixon has great affection for The Scarlet Pimpernel; Krysta Rodriguez saw Assassins at Studio 54 three times; and Arbender J. Robinson auditioned 30-plus times over many years before being cast in The Lion King. At 8 years old, Andrew Keenan-Bolger was so moved by Les Mis that he cried when characters died. Liz Callaway misses "when theatres were grungy and the area was in danger" (as do I). There were columns in the set of Grand Hotel because there were columns in the rehearsal room. As a kid, William Finn thought that My Fair Lady had always existed, like the Talmud. Longtime stagehand Manny Diaz has never seen a Broadway show from the audience. Twelve-year-old future-director Lynne Meadow thought her first Broadway show (Destry Rides Again) wasn't that good. Pretty much every other interviewee was gobsmacked by their first.

To read more, click here.
Posted by Wendy Caster at 8:21 PM No comments: