DonJuan, or Wages of Debauchery

The often delightful (but too frequently slow) DonJuan, or Wages of Debauchery, adapted from a Czech classic, is conceived and directed by Vit Horejs and presented by the Czechoslovak-American Marionette Theatre. This Don Juan is not a charmer. His seductions often veer into molestation territory, and he's not above a murder or two. It doesn't help that Horejs plays him in an endless monotone that manages to remove all traces of charisma and warmth. Luckily, however, Don Juan is only the titular lead.

The true star is Don Juan's servant, Kasparek, performed with wry humor and great panache by Theresa Linniham. Kasparek is a familiar type, kind of dumb yet brilliant when it comes to self-protection. Linniham provides him with warmth and humanity, and it's a pleasure to root for his passive-aggressive silliness. The hoariest humor is somehow fresh in Linniham's capable hands. The press release refers to her work as "a comic tour-de-force," and you'll get no argument from me.

The humans are visible and interact throughout Don Juan, and on the whole they are pretty wonderful. (The rest of the cast includes Deborah Beshaw-Farrell, Otis Cotton, and Tess Wonson.) The costumes are endearingly ragtag, the scenery the same. The puppets range from fairly stiff to multifaceted, but they are all animated by the cast's joy and energy. Some of them are stunning.

DonJuan, or Wages of Debauchery has an appealing "let's-put-on-a-show" vibe. If it were 15 minutes shorter, and if Horejs gave Don Juan even the glimmer of a personality, it would be a complete success. As it stands, it is still a lovely evening in the theatre.

It's mid/late semester for me, which is why I've been largely absent from this blog of late. But I've missed you all dearly, and I promise to be back in full force in late spring and summer, which is when I catch up on a lot of the shows I don't get the chance to see during the school year.

Meanwhile, I wanted alert anyone who is interested to a blog post I did for the Society for Ethnomusicology's new Sound Matters blog, which came out beautifully, thanks in large part to its fearless, brilliant editor, Jim Cowdery. You can link to it here. Be sure to check out the clips embedded in the essay!

Catherine Trieschmann's new play, The Most Deserving, aspires to be both entertaining and significant. It is completely successful in the former regard, and not so much in the latter.

A small arts council in Kansas has a $20,000 grant to bestow to an artist who "must demonstrate both artistic excellence and financial need and should preferably be an underrepresented American voice." Jolene, the founder and fierce protector of the arts council, wants the grant to go to a local artist who is one eighth Native American--or is it one sixteenth? Liz, an assistant professor of art, wants the grant to go to Everett, a paraplegic African-American who makes art out of garbage--but Everett hasn't applied, and the deadline has passed. Edie, who funded the grant from her late husband's fortune, turns out to be surprisingly slippery as Jolene and Liz vie for her vote. Ted, Jolene's husband, is mostly interested in getting Liz's attention. Dwayne, unemployed and in desperate need of cash, wants to receive the grant himself, despite fitting none of the requirements.

The show's lively 90 minutes are stuffed with broken allegiances, revealed secrets, and bad behavior. Is the play trying to show us the parochialism of the Mid West? Perhaps, but the setup is a bit by the numbers, and the characters aren't convincing as actual people. The one point the show does make brilliantly, however, is never to think that grants (or jobs, for that matter) are bestowed to "the most deserving"--or that the logic behind the ultimate decision has anything to do with, well, logic.

Trieschmann is well-served by efficient direction by Shelley Butler and a talented and game cast, led by the wonderful Veanne Cox, who gives the best massage you are ever likely to see in a play. The cast navigates the play's twists and turns with aplomb and makes the most of Trieschmann's genuinely funny situations and dialogue. Whatever its flaws, The Most Deserving is a great deal of fun.

You can credit Ted and Lo for truth in advertising; their show does hurt a bit. It also entertains, charms, and delights. I'm not sure that it gels overall, but what can you expect from a song list that covers love, insecurity, evil, mass murder, suicide, the media, and a boy who only says, "I Don't Care"? 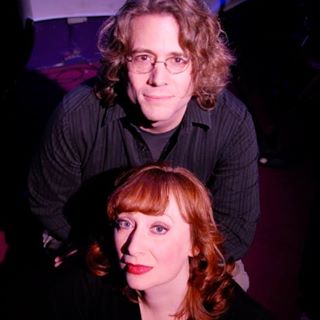 Ted (Tad Stafford) plays guitar and sings. His musicianship is unquestionable, and he can be quite charming. (There was general consensus among my friends, however, that his curtain of gray hair blocks his communication with the audience.)

Lo (Lorinda Lisitza) is amazing. (For an earlier, equally enthusiastic review of her work, click here.) She's the real deal, singing and acting brilliantly in a wide range of styles and moods. Her voice is gorgeous when she wants it to be and rough when that's her goal. She also plays a mean harmonica.

Lisitza has the talent and charisma of a star, and I would gladly, gratefully, go to see her in, oh, Next to Normal, Happy End, Beautiful, 42nd Street, the Addams Family, Chicago, Anyone Can Whistle, Sweeney Todd, Gypsy--well, you get the idea. Until producers wise up and cast her, I'll make sure to see whatever it is she does do.

READ MORE>>
Posted by Wendy Caster at 4:04 PM No comments:

True confession: I love Joey.  The horse, that is.  Well...the puppet horse.

Thanks to the National Theatre Live's encore screening at Symphony Space on Monday night, I got to see the play for the fifth time.  Yes, I saw it four times in New York.  No, I didn't pay full price because of TDF, LincTix (for theatre patrons ages 21 to 35), and Student Rush.

The story itself is a mix between a romance and a period piece, just with a boy and horse instead of a boy and girl.  Sixteen year old Albert falls in love with Joey the horse.  Albert loses Joey to the war effort.  Albert joins army in order to find Joey.  It's a sweet and heartwarming story, but pretty predictable.

So why go see it so many times?  Why not just watch the Spielberg film?  The puppets.  They are the heart and soul and magic of this piece.  The amazing thing about the puppets is that the puppeteers are in plain sight.  Yet, no matter how hard you try to focus on the puppeteers (and believe me, I have), they bring Joey and Topthorn, Joey's army horse friend, to life in such a way that you just stop seeing them.  There are several moments where the puppets' choreography takes my breath away.

The National Theatre production is slightly different from the Broadway one.  The text is altered for one.  Captain Nichols has a heroic and nationalistic speech before the first cavalry charge in Act I that was cut from the Broadway production, probably because it wouldn't resonate in the same way.  In addition, this production has several small parts spoken in French and German.  In the Broadway production, these were spoken in English with exaggerated accents.  I personally think the comedy worked better in French and German, especially during the No Man's Land scene.  I think the assumption is that British audiences are more likely to know some conversational German and French, whereas American audiences aren't.  Things like this make me think that Brits are just naturally smarter.

The performances were quite good.  Sion Young's (Albert) performance was adorable in the first act but really took off in the second act.  Ian Shaw (Friedrich) was also quite good once he decided to stop shouting so much.  The ensemble member singing lead in the folk songs had a particularly poignant and beautiful voice.  All three of the horse teams were brilliant, but I loved the team performing Topthorn.  Their performance was wonderfully spirited.

I think NTLive might need to readjust lighting design for these live streamed productions though.  Several scenes were quite dark on film, which makes me think that they didn't adjust anything for the live stream.  That's a small quibble, however.

There are three more encore performances this month at Symphony Space on April 3, 11, and 16.  I highly recommend that you see this if you didn't see it when it was in New York.  General admission tickets are $23 (regular), $21 (students and seniors), and $19 (Symphony Space members).  If you're not in New York, performances near you can be found here.

And if you need some convincing first, see the videos below.

But seriously...go see the show.  You won't regret it.