Inspiring others was the theme at the League of Professional Theatre Women 2019 Leadership Luncheon celebrating the inaugural Rachel Crothers Leadership Award to Donna Walker-Kuhne, an expert in audience development who has raised more than $23 million to promote the arts to multicultural communities.

Yvette Heyliger, chair of the LPTW Rachel Crothers Leadership Award and co-vice president of programming, introduced De Shields, who she said inspired her since she just turned 60 and he recently won his first Tony at age 73. DeShields urged the audience to "stay on your chosen path until you win." A charismatic master of ceremonies, he noted a day after the first Democratic primary debate that Crothers was the one who coined the phrase, "A woman's place is in the home and in the Senate."

A veteran of over 22 Broadway productions, she has provided multicultural marketing and group sales for the shows Once on This Island, The Lion King, Aladdin, Smokey Joe's Cafe, among others, and for nonprofit clients such as Alvin Ailey American Dance Theatre, The Billie Holiday Theater and The August Wilson African American Cultural Center. She is an adjunct professor at New York University and Bank Street College, and the co-founder of Bite the Big Apple, an annual multicultural audience development tour that brings Australian arts professionals to New York, and the co-founder of Impact Broadway, an initiative that encourages African American and Latino students to participate in theatre.

She was introduced to the crowd by playwright/filmmaker Rehana Lew Mirza (Hatef**ck). Walker-Kuhne said she came from a long line of warriors and educators and that she never gives up on her vision because that's in her heritage. She emphasized the crucial role teachers provide in people's development and cited a list of her own mentors who inspired her, including Arthur Mitchell, dancer/choreographer/founder of the Dance Theatre of Harlem, who exposed her to classical ballet.

She encouraged the audience to acknowledge and embrace diverse experiences and opinions and said, "Your job is to change the world and once completed, do it again."


The Rachel Crothers Leadership Award is given to a woman in theatre who has shown exemplary service and sacrifice for a common cause that creates a better society. Crothers, the first woman playwright and director to find commercial success on Broadway, had more than a 30-year theatre career and produces over 25 plays. 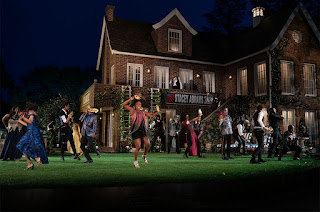 Posted by Wendy Caster at 12:10 AM No comments:

The 75th Theatre World Awards celebrated the debut of promising Broadway and Off-Broadway actors on June 3 in a sweet ceremony full of touching stories, even though it ran more than two hours long. Host Peter Filichia charmingly kept the show moving though.

The highlight was Nathan Lane accepting the John Willis Award for Lifetime Achievement in the Theatre. He mentioned that he was getting to the age where he was "distinguished" and had accepted three such awards this season. Phillip Boykin (The Gershwins' Porgy and Bess), Ernestine Jackson (Raisin) and Linda Eder (J&H) sang.

Posted by Sandra Mardenfeld at 3:58 PM No comments:

There are plenty of pleasures to be had at the Marquis Theater, where Tootsie is running and probably will be for a while. The show is often quite funny; the cast is solid; David Yazbeck's score is strong and occasionally boosted by some truly impressive lyrics. I was pleased with the way a handful of the more outdated aspects of the film plot have been reworked and updated for Broadway. Sandy, here played by Sarah Stiles and in the film by Teri Garr, was at least for me easily the most problematic character: in her original iteration, she was a relentlessly neurotic, irritating obstacle whose sole purpose seemed to be to ruin Michael's best-laid plans. A particularly fun musical number with increasingly tongue-twisty lyrics, performed exceptionally well, will do a whole lot for a gal, I guess. As will an actual character arc, replete with a resolution. 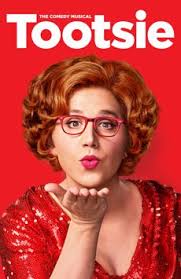 A very big deal, though, has been made about how the Broadway version has addressed contemporary cultural concerns, and on this point I'm not as convinced. Yeah, sure, Michael's schlubby roommate Jeff (Andy Grotelueschen)--a hilariously deadpan voice of reason here, as he was when Bill Murray played him--now strenuously assails Michael for stealing work from women, at least for a few seconds. There are some other attempts at updating with an eye toward contemporary gender roles: Julie (Lilli Cooper) is no longer sleeping with her sleazy director Ron Carlisle (Reg Rogers) as she was when she was Jessica Lange; here, she handles his sexism with aplomb. Later, when Michael-as-Dorothy forgets himself and kisses her, she eventually decides to roll with the times, and suggests they give romance a go anyway.

This is all well and good, but it's also all very much on the surface. One of the strengths of the film that the adaptation seems to have overlooked entirely is that back in 1982, Michael-as-Dorothy had to put up with a whole lot more in the way of condescending--and sometimes downright icky, scary, predatory--sexist bullshit from just about every man he worked with, talked to, or met. He also had to negotiate the very genuine feelings--and, eventually, break the heart--of Julie's father, Les (Charles Durning), who falls in love with Dorothy and who here has been completely rewritten as a younger, dumber, admittedly much funnier character named Max Van Horn (Jon Behlmann). But the constant barrage of sexism that Michael had to contend with in the film ultimately made the character's arc more meaningful: having walked in women's shoes, the character ends up Learning Some Valuable Lessons About Himself and Others. The final scene--in which he admits to Julie that he "was a better man with [her] as a woman than [he] ever was with a woman as a man"--thus feels more like a genuine realization, a heartfelt apology, and a serious attempt to move beyond a monstrous deceit that ended up hurting a great many people.

Of course, a Broadway musical has to make way for stuff a comedy film doesn't have to contend with, so there's much more singing and dancing, a speedier pace, and more frequent one-liners, but I was a little disappointed by how totally they replaced any real character development. Santino Fontana hits all his marks as both Michael and Dorothy, and sure, his character is still a self-centered blowhard who is exceedingly hard to work with. But Michael has no clear learning curve here. Instead, the Broadway Tootsie shows us a really talented straight, white dude who dresses like a woman, whereupon all the qualities that alienated people when he was a straight, white dude pretty much immediately get resolved. This is where I got a little confused: Maybe Tootsie was supposed to be set in a magical fairy world where everyone is totally cool about negative personality traits when middle-aged women exhibit them, but can't deal at all when dudes do? I don't get that part, having never in my life experienced such a thing, but maybe the all-male production team of the musical knows better?

Anyway, you know the drill: Michael-as-Dorothy lands a great role, puts up with Ron Carlisle's sexist remarks for about three seconds, bonds with Julie over how hard it is to be a professional woman in a man's world, teaches Max to be a better actor (or something), reveals his deception....and everything ends up pretty okay, anyway. He doesn't really need to do much in the way of penance, the supporting characters pair off (or don't), and it's pretty clear that Julie will come around in time, just like in the movie.

I say this all not to ruin your time seeing what is, in the end, a solidly produced and impressively-performed musical with some genuine laughs, and a few songs I fully admit I'll want to listen to repeatedly when the cast recording comes out. Go see it if the gender politics aren't going to bug the shit out of you. It's a charming, enjoyable show. But aspects of it irked me a lot more than I wish they had, largely because I've grown exceedingly weary of lip service to social causes, and to bandaids that blithely get slapped over deep wounds in the name of mass entertainment. If the prospect of a straight white guy who puts on a dress and thereby manages to succeed in all the ways straight white guys tend to succeed anyway doesn't jibe you at all, by all means, go, have fun, take your visiting relatives. Otherwise, though, maybe skip this one. Believe me when I tell you that you won't be missing anything you didn't know was already going to happen, anyway.
Posted by Liz Wollman at 8:54 PM No comments: