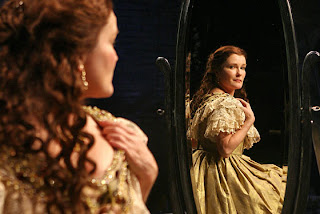 The first act of Charles Busch's new play, in which grand, self-centered actress Laura Keene behaves despicably to her fellow actors as they prepare to perform An American Cousin for President Lincoln, is meant to be a comedy, but it's merely busy rather than funny. The second act, in which Keene undergoes a reality check after Lincoln is assassinated, is more interesting and successful but it doesn't succeed at bringing the play into focus. Does Busch mean this to be a valentine to the theatre and its ability to create truth and illusion? I couldn't be sure. In the title role, Kate Mulgrew works her ass off to sell the first act but sweat is the last thing we want to be aware of watching a comedy that depends on the appearance of effortlessness. She's wonderful in the second act - the play's best scenes are the quiet moments between her and Ann Duquesnay as her attendant and confidante - but it's not enough to shake the feeling that the play's themes are muted and its higher aims unclear.
Posted by Patrick Lee at 6:00 PM