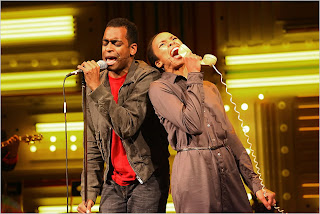 Fascinating, frustrating, exciting, problematic, Passing Strange is the kind of flawed but wildy exhilarating show that leaves you jazzed about theatre and its possibilities. It’s uncategorizable, and - for anyone who is serious about the art form of musical theatre - unmissable. Oft-narrated in song by its composer and co-author Stew, this autobiographical portrait of the artist as a middle-class young black man moves beyond the anachronism of Spring Awakening and more boldly melds concert and narrative musical theatre. The show is too long, and it nosedives in the second act, but when it flies it’s a blazing arrow that lights up a new way that musicals might go. The score is flat-out phenomenal: credible and varied with lyrics that put this year’s Tony-nominated ones to shame.
Posted by Patrick Lee at 11:39 PM