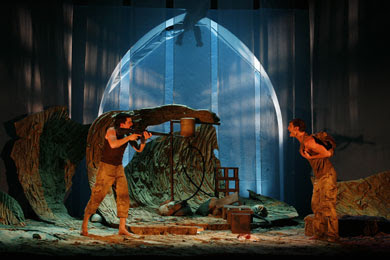 Photo/Carol Rosegg
Watching Trista Baldwin's play Sand, which in turn features actors staring, Godot-like, at more sand, brings to mind the words of everysoldier Justin (Alec Beard): "It's like I'm thirteen, at summer camp." Aside from Anita Fuchs's blasted clay set and Traci Klainer's mirage-like transitions in light, the plight of these three US soldiers, guarding a gas station, seems like nothing so much as a camping trip in hostile territory. The so-young veteran, Armando (Pedro Pascal), watches his warnings scatter into the wind, especially off the backs of Justin, a breezy kid from Springfield, and Keisha (Angela Lewis), a quiet girl born of the Wal-Mart generation. The strength of Baldwin's play comes from their casual conversations, utterly natural and unassuming bits of grit that seem both dirty and new, all at once. The show also benefits from the expert direction of Daniella Topol, who has made the dusty desert into a dreamscape that dances through gauzy backdrops and spins in and out of time to create an echoing effect -- like that of an hourglass -- in which minute scenes each fall, into a meticulous pile, until suddenly, there's an explosive result. But Baldwin's finale, which doubles Pascal as a fleshed-out Iraqi named Ahmed (who gives lines to the invisible border and voices to the unspoken truth), is so stuck in this halfway world that neither it nor the Glass-like music of Broken Chord Collective are half as effective as the quiet before the storm.

[Also blogged by: Patrick]
Posted by Aaron Riccio at 3:00 PM