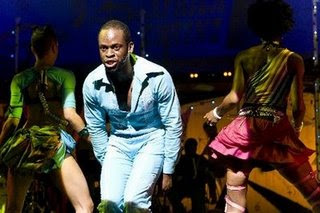 Photo/Monique Carboni
I'm always skeptical of a show that has to cajole the audience into participating, rather than simply trusting them to follow the undeniable afrobeats that Antibalas has laid down to Fela's music. So while I'd love to simply shout "yah, yah"--especially now that I've seen Sahr Ngaujah's tremendous performance--I simply can't: the show panders to culturally inept audiences with the hint of something exotic, and then grotesques Bill T. Jones's well-choreographed dancing into a flailing, desperate Broadway-bound monster. "Expensive Shit" is too good of a song/anecdote to let me so neatly put down some of the better intentions of Fela!, but the show often pushes too much, stretching the chronological sequence for drama, adding mystical elements for grandeur, and relying too much on the same shit, song after song, particularly in the second act, when the climactic, must-hear songs like "Zombie" have long gone, taking any sense of political turmoil or musical revolution with them, leaving only the hint of freshness behind.
Posted by Aaron Riccio at 8:00 PM