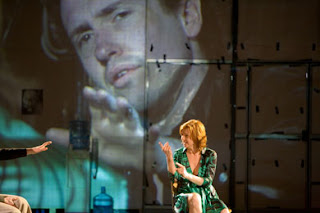 The script is by way of John Cassavettes' screenplay of his same-named 1977 film which centers on a stage actress who has what seems like a nervous breakdown while in search of the character she's rehearsing. This multi-media stage adaptation, directed by the brilliant Ivo van Hove, is miraculously even more compelling than the film: the near-constant use of video screens retains the intensely intimate Cassavettes close-up style. while theatrical devices depict the actress' forays into the hallucinatory more effectively than the original film, where they seemed stilted. The playing space may seem at first like a mad meta playground - we're backstage, on the stage, and in the wings, with live cameras ever hunting and gathering as Neil Young songs are cued in and out as if supplying a film soundtrack - but it's all disciplined, effective and involving rather than distancing and pretentious. The director has zeroed in on Cassavettes' love of the danger of theatre, and more specifically his insight into the actor's process, and has transformed the screenplay into a riveting theatrical triumph which explores the paradox that performance is both real and unreal. The cast is uniformly superb but special mention must be made of Elsie de Brauw, whose central performance is so fully realized and engrossing that she did what I would have thought impossible and chased all memory away of Gena Rowlands in the original film. In Dutch with English subtitles and, fair warning, two hours and twenty minutes with no intermission. Don't let that stop you from making the trip to BAM this weekend for this; it's one of the best shows of the year.
Posted by Patrick Lee at 12:22 AM

So bitter that I could not make it to BAM. Much as I appreciate their desire to get as many different shows up there as possible, a slightly longer run would've been appreciated, especially over the holiday season.