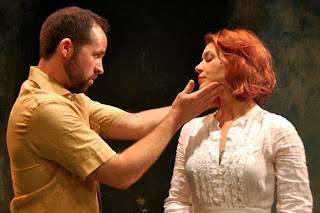 Uncompromising, provocative and often bitterly funny, Mac Rogers' Viral is the first must-see of this year's Fringe Festival. In lesser hands the story - of a suicidal woman who consents to let three fetishists videotape her death - could make for nothing more than lurid, soulless shock, but the playwright uses it as a high-stakes example of the potential for dehumanization in both fetish and in Internet culture. The play's suspense, as well as much of its pitch black comedy, comes mostly from the tension of whether close personal contact will thwart the suicide. As with his Hail Satan! two years ago, Rogers approaches edgy relevant topics with a probing intelligence and a wicked sense of humor and the result is an absorbing, thought-provoking entertainment. The cast effectively form a tonally cohesive unit but Amy Lynn Stewart, compelling as the suicidal Meredith, and Rebecca Comtois, vibrant as one of the fetishists, stand out in the show's most pivotal roles.
Posted by Patrick Lee at 12:17 AM