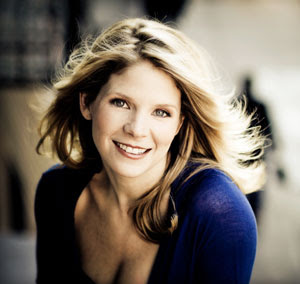 When was the "Golden Age" of the American musical? When it comes to female leads, the Golden Age is now. Audra McDonald. Bernadette Peters. Kristin Chenoweth. Donna Murphy. Marin Mazzie. Patti LuPone. Victoria Clark. Alice Ripley. Christine Ebersole. And, yes, Kelli O'Hara. (Imagine a season with all of them on Broadway!)

Last night, O'Hara opened a two-week stand at Feinstein's at Loews Regency, explaining that its theme is "Beyond the Ingenue." But she goes further than that. She goes beyond genre, beyond gender, beyond expectations, and beyond wonderful. Her voice is beautiful, as is she, but more importantly she knows how to express the story and the deepest emotions in each song. Take her subtle, expressive version of "Finishing the Hat," in which she perfectly balances grief at what's being missed with satisfaction at what's being accomplished. Or "I Could Have Danced All Night," in which she actually does know "what made it so exciting." Or "You're Always Here," in which she nails the comic Tom Kitt-Brian Yorkey exploration of the ambivalent pain that may come from being left by someone you didn't necessarily want to stay. Or her version of "This Nearly Was Mine," which is every bit as textured, heart-breaking, and breath-taking as Paula Szot's (which is saying something!).

I imagine that there is something O'Hara can't do, but it must be quadratic equations or car repair. Whatever her flaws, they sure don't have anything to do with her singing.
Posted by Wendy Caster at 5:50 PM