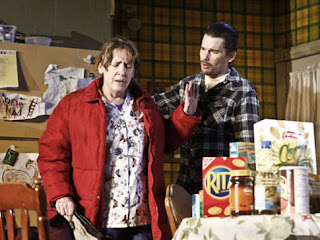 Is there anything left to be said about dysfunctional families? If so, Tommy Nohilly hasn't found it. His debut play, Blood From a Stone, with its echoes of Sam Shepard and its unremitting ugliness, is a second-tier grim-a-thon. If you see even a little theatre and/or independent film, you know the drill: the parents hate each other; the father is violent; the mother is angry; one kid is charming but can't be trusted; one got away; and the last, the main character, is more insightful and sensitive than the others--and generally autobiographical. Everyone argues. Drugs are consumed. Punches are thrown. Blood From a Stone does have some compelling and convincing moments, particularly on the rare occasions it shows a little humor, but not enough to justify its two hours and 45 minutes. Ethan Hawke tamps down his usual theatrical exuberance into a subtle, pained, hopeless yet hopeful performance. Natasha Lyonne gives a jolt of energy to the proceedings--she is one of those actors whose very presence brings everything up a notch. Daphne Rubin-Vega does well in a quick scene as the adulterer next door, and Ann Dowd, Gordon Clapp, and Thomas Guiry bring flesh and blood to characters that get only a couple of traits each. (Note: I saw this fifth row, close to center, with free reviewer tickets.)
Posted by Wendy Caster at 2:20 PM