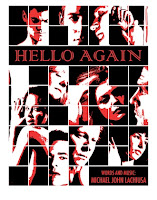 Ten people. Ten couplings. A has sex with B who has sex with C, and so on, until H meets up with A, completing the circle across the 20th century. The hookups tend toward the cold, with affection, love, and foreplay in short supply. The characters range from lost to needy to manipulative, with unhealthy, unattractive self-involvement a frequent trait. Yet Hello Again, Michael John LaChuisa's musicalization of Arthur Schnitzle's 1900 play La Ronde, is often glorious. LaChuisa's music soars, and each section is an elegant theatrical creation. His paeans to neediness are heart-rending, and he combines humor with heartbreak perfectly.

As directed by Jack Cummings III in a large, feature-less loft, Hello Again happens in and around the audience, providing an intimacy that is simultaneously wonderful (having those singers right next to you, unmiked, is heaven) and, well, icky. Facing those naked pumping butts, so close at hand (literally), is weird. The first time I saw the show I found them funny, but the second time I felt I had been forced into an unwilling, unfulfilling voyeurism. Since lack of fulfillment is a theme of the show, I guess Cummings made an artistically legitimate choice--but still weird.

However, Hello Again is about the music, and the score is beautifully sung. The cast ranges from quite good to excellent to amazing. Particularly impressive are Bill Stillman, Alexandra Silber, and Elizabeth Stanley, who bring full dimensionality to their characters and definitively nail their songs.

The costumes by Kathryn Rohe and lighting by R. Lee Kennedy are everything they need to be and much more, and the seven-piece band fills the loft space splendidly.

(Tdf tickets, twice, impossible to describe my seats in any useful way.)

Anonymous said...
This comment has been removed by a blog administrator.
12:40 AM

Thank you so much for coming along!