Judy Gold takes Avenue Q to Jerusalem for a Holiday

Okay, not really. Having been on a work-schedule imposed hiatus from the theatre, I managed to get to a few things in a cluster. 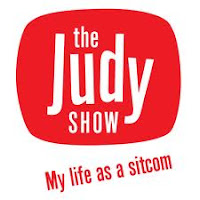 The Judy Show: My Life as a Sitcom


Judy Gold is a big old lesbian who wants a sitcom. That isn't disparaging. She reminds you of these obvious facts repeatedly over the course of an hour and a half. These facts are obvious because I'm sighted. The show itself is equally obvious: sing-along theme songs, occasionally rewritten to mirror Judy's life as resume, an obsessive knowledge of the form, fantasies of growing up Brady/Partridge/fill-in-the-blank. Sadly, the only cliche she doesn't use is wrapping the damn thing up in 22 minutes. Judy is a solid joke-teller and has enough ugly faces to stop a wall of clocks, all funny. The show is part biography, part audition. Her biography, as honestly told as it no doubt is, is farily generic outside the Bible Belt. The audition is cute but possibly indicative of why The Judy Show is off Broadway and not on Bravo. I would recommend it only for the die-hard Judy fan or those for whom any 6'3" lesbian will do.

Avenue Q is one of my favorite Broadway musicals of all time. I won't go into the reasons why beyond the fact that it is well-written, witty, skewering, delightful fun. I hadn't seen it in the smaller New World Stages but wasn't worried about how it would transfer. I was more worried about the cast. Adam Kantor, as Princeton/Rod, doesn't have the aw-shucks charm I've enjoyed previously. He's a fine vocalist, though thin and timid in the upper range. He was completely likeable and charming, better as Princeton than Rod. Veronica Kuehn, as Kate Monster/Lucy/Others, was a delight--fine voiced and the kind of underdog spirit that makes you root for her, but versatile enough to handle Lucy's looseness. The quibble with both actors is that they are simply actors holding puppets whereas previous casts have used the puppets as extensions of themselves, charming mirrors--none more powerfully than originals, John Tartaglia and Stephanie D'Abruzzo. Rob Morrison as Nicky/Trekkie Monster/Bear/Others has a completely different creepy, child-molester vibe than Rick Lyon did, but he is equally effective. The thing that prevented this production from being great was Gary Coleman. In six outings every actor I've seen play Gary, save the original, the brilliant Natalie Venetia-Belcon, has sucked and dragged the show down. How hard is it to find an African-American actress in New York City who can blow the roof off with her voice and say "What you talkin 'bout"? Apparently, they can't get taxis either because, somehow, they're missing the auditions. The show is so strong, though, that it is worth a visit. Even the role of Gary Coleman is so well-written that a talent vaccuum can merely deflate it, not destroy it completely.

Jerusalem
Jerusalem has come and gone and I don't get it. The fuss that is. To be fair, part of the reason I may not have gotten it is because I only understood about 30 percent of what came out of their mouths. Apparently, they can't afford consonants in this trailer park. Mark Rylance was great, give him a Tony, no complaints here; but I appreciated his performance in La Bete more. Oddly enough, I found him more believable in a farce. I've spent some time around trailers (murdering cousins on welfare--you know the sort) and am amazed how similar the trash looks in the UK. Maybe it's my trailered history that makes me unsympathetic to lazy, drug dealing/taking malcontents regardless of their story-telling spell-bindery. Maybe growing up around similar ilks, who live their dreams only in chemically-induced paralysis and live their lives in chemically-induced violence, makes me unmoveable when the drama of art imitating life is so comparatively undramatic. Regardless, I couldn't for the life of me tell you what the difference between scene one and scene two were from a theatrical standpoint--same lukewarm mush, different spoon. It was incredibly disappointing not to love the show. I so wanted to.
Death Takes a Holiday

Death Takes a Holiday should probably be called Maury Yeston Takes a Holiday. He wrote two original melodies and reworked two from other shows (Love Can't Happen from Grand Hotel and Unusual Way from Nine) then repeated them over and over and called it a score. He wrote the lyrics using Boggle, children's edition. Every song was exposition that exposed nothing. A song about the death of a son spent 64 bars describing a rose (okay, maybe only 32). Not that it mattered because this could-have-been-heart-breaking idea of a song was entrusted to Rebecca Luker. She was so wooden and stiff that she would have cried splinters had she bothered to show a single emotion. The director did no one any favors. Doug Hughes ended nearly every song down front, facing forward, arms raised, cheesy smile, button on the last note implied. The rest of the cast was solid enough, although I wouldn't have minded if Max von Essen had shown a second emotion--borrow one from Duchess Lamberti, she's not using any. Jill Paice, as Grazia, and Kevin Earley, as Death, are superb. She gets the unfortunate chore of making love at first sight believable and sustainable and he gets the unfortunate chore of being the cause. I felt fortunate to watch them work. I almost wanted to die. (When they weren't on stage, I really wanted to die.) I wish I could have visited them at a more entertaining vacation spot.
Posted by Rodney Sexton at 6:19 PM