When reading reviews, you sometimes just have to wonder, "Did we see the same play?" The Call, written by Tanya Barfield, directed by Leigh Silverman, and currently playing at Playwrights Horizon, was largely well received, garnering an overall B from StageGrade. The reviews called it thoughtful, though-provoking, and sensitive in its depiction of a white couple who decide to adopt a child from Africa and the way it affects their best friends, an African-American lesbian couple. To me, however, The Call is a potentially fascinating essay awkwardly jammed into the lives of cardboard characters who exist only to represent political points of view. And the final crisis, [spoiler] whether the couple should adopt a 4-year-old from Africa, is used to indict the wife as selfish and perhaps mildly racist, when in reality the problems associated with adopting a child of that age are well-documented and serious, whether the child is from West Africa or Westchester. But that's not the only artificial situation in The Call: the lesbian couple have no chemistry, nor do the married couple; the friendship between the white wife and one of the African-American lesbians rings false; and the African next-door-neighbor is an embarrassing and preachy plot device. The scenery was nice. 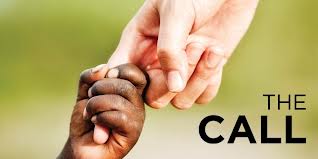 We enjoyed the show, but I can't disagree with your objections. Somehow in spite of the occasional false notes, it held our interest and didn't turn us off. Still, more of an honest C+ than a B (as long as it is understood that there is normally rampant grade inflation in reviewing theater.)