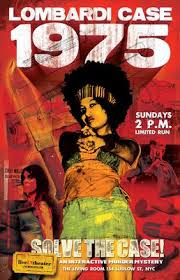 LiveInTheater has been around since 2009. Run by creative director Carlo D'Amore (who also played Captain Miller), the troupe specializes in immersive theater pieces based on historical murder cases. There are a few such reconstructed cases on offer at any given time, and the troupe seems to operate rather brilliantly on a minuscule budget. The company's emphasis on audience immersion is certainly trendy, but their approach to theater-as-history, as well as their bare-bones approach, links them more firmly to New York City's celebrated fringe theater of the 1960s and 1970s than other, somewhat more gimmicky, somewhat less socially relevant interactive productions (Tony n' Tina's Wedding comes immediately to mind). It doesn't hurt that The Lombardi Case takes place all over a neighborhood that is not terribly far from storied venues like La MaMa and St. Mark's Church in-the-Bowery, and that still feels pretty grubby and aggressively urban in ways that other gentrified Manhattan neighborhoods do not.

Indeed, while the funky bassline playing on continuous loop in the Living Room didn't hurt the mood, the neighborhood itself helped the actors transport the audience very quickly to the past. Once we were greeted by the overeager Officer O'Donnelly and given terse instructions by the endlessly harassed and pathologically pissed-off Captain Miller, we were sent, in color-coded teams of about eight, out into the streets, armed with a map, some mugshots, and a few dime-store notebooks. One member of each team was instructed to wear a cap that was the color of our team; my daughter was thrilled to oblige.

Full disclosure: I usually hate this sort of thing, and I know a lot of people who hate this sort of thing way, way more than I do. But Lombardi Case 1975 was different from the outset. Sure, ok, some of my interest in the piece has to do with the fact that I am endlessly fascinated by all things 1970s, and especially 1970s New York. But there was more: the piece was well-performed, well-organized, impressive in its creativity, and immediately interesting in its setup (a murder mystery about a drugged-out socialite who gets bludgeoned to death in a squat that subsequently burns to the ground? Come on, people, we have a mystery on our hands!). Plus, we ended up on a team that was, to a person, friendly, perfectly cool about the fact that there was a ten-year-old along for the ride, and totally psyched to find and interrogate suspects. We, the red team, followed our diminutive team leader down Ludlow Street and, within minutes, came across one of the characters we had been given a mugshot of.

For well over an hour and a half, we walked around the neighborhood, looking for suspects to interview, pausing once in a while to acknowledge the tiny old synagogue that is now a Thai restaurant here, and the crumbling tenement that has been converted into huge residential lofts over there. Occasionally we would approach someone or something we thought to be part of the act, only to find that we were wrong. A search for a dumpster turned out to be a red herring that took us momentarily off course; one guy was so odd, and so chatty, that it took us a good five minutes to determine that he was just some random odd chatty dude, and no one involved with the show at all.

Then again, some of the characters blended so brilliantly into the neighborhood that it took us a few minutes to get wise to the fact that they were available for questioning. One character--I am not going to tell you which one--fit so brilliantly into the urban landscape that our entire group breezed past him and were halfway down a fairly lengthy block before we figured out that we should return to talk to him. And some of the actors were so enormously entertaining that passersby who had nothing to do with the show joined our team temporarily, just to see what the hell was going on. The time flew by, and before we knew it, we practically had to run back to the Living Room in time for the final leg of the piece. Once there, we were met by both policemen, and all the people we had encountered and interviewed on the street. Each team had a chance to question the characters--my daughter was our spokesperson, and she did a fine job of interrogating the suspects. Then, the mystery was swiftly, engagingly resolved by the actors.

It would be tempting to argue, just for the sake of balanced writing, that my daughter's childlike wonder at even the seediest of New York City stories filled the whole team with renewed delight, but frankly, that wasn't the case: we didn't need the presence of a kid to get lost in the story and to bond as a team. Sure, she was cute, charging through the city streets in her red hat on a quest for clues, but I am biased, and she was hardly alone: it was great fun to explore the neighborhood, to feel part of a larger task, and especially to engage with actors who remained solidly, delightfully in character regardless of what we--and the city around us--tossed at them. My daughter quickly became a running joke among the characters, who frequently greeted our group with off-the-cuff comments about how twisted and desperate the police force must have become to be hiring children, or how police officers seem to be getting shorter and shorter of late. But from what I could tell, the rest of the teams had as much fun as we did, kid in a cap or none.

In sum, then: Lombardi Case 1975, which runs for a few more weekends, was enormous fun and something you should try to see before it closes, with or without your offspring. If you miss this particular case, you should certainly seek out the Live In Theater's other productions, because the company deserves to keep making theater and building an (incredibly diverse, incredibly enthusiastic, enormously appreciative) audience. For all my misgivings, I am quite pleased that I chose to bring my daughter to this show. Good theater is good theater, after all. Her hometown has many layers of history to it, and I want her to know and love it--even the imperfect parts--as much as I do.  And finally, to paraphrase a song about New York, if she can see a show on the Lower East Side about drugs, drag queens, hookers, and those douchebag pigs at the precinct, she can see a show about anything...a-ny-where.
Posted by lizwollman at 4:00 PM