A slight, but emotional play by John Patrick Shanley (Doubt--Tony Award/Pulitzer Prize), Outside Mullingar excels at beautifying life's minutiae without delving deeply into its complexities. Like his Academy Award-winning screenplay, Moonstruck, this Manhattan Theatre Club production, which opened last night, depicts quirky characters that fall in love despite themselves.

Although predictable (girl meets boy, boy pushes down girl, decades pass, boy gets girl), the play enchants by the strength of its cast, who often infuses their simple parts with a vulnerability not always apparent in the playwright's words. Especially moving is a tender bedside scene that Brian F. O'Byrne (Anthony Reilly) and his disapproving father, Peter Maloney (Tony Reilly) share in the middle of the night where two men reluctant to talk about feelings heart-achingly appreciate one another--perhaps for the very first time--as the regret that etches their words sits helplessly on their faces. Dearbhla Molloy, as the mother of Rosemary Muldoon (Debra Messing) offers a certain Irish feistiness as she chats about her own demise and admonishes the O'Reilly's on the state of their home: "Your mother would die again if she could see this house."Messing, making her Broadway debut, sounds authentically Irish and holds her own with the stellar cast. You never quite believe, though, with her delicate frame and innate grace, that she could perform the chores required of the farm woman she plays. 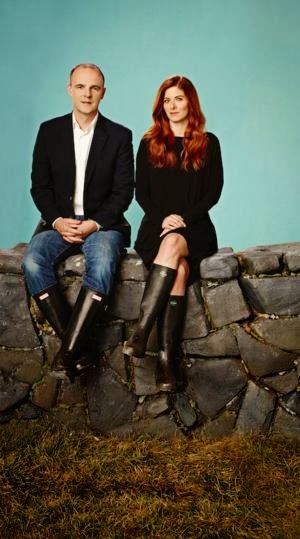 Lovely, too, are the endearing details embedded into the set. From the soft patter of the rain on the Reilly's window--a tiny tap tap that intimates something is about to change--to the plain crosses that hang on the kitchen walls, these small things infuse the play with intimacy. Indeed, Shanley knows this world. In fact, so does designer John Lee Beatty and director Doug Hughes, who visited Shanley's ancestral home in Ireland, according to a January 9th essay the playwright wrote in the New York Times. Outside Mullingar touches audiences with this authenticity. Most moving of all is the play's sense of longing and recrimination--for, in the span of 100 minutes, forgiveness is found and the loneliness all humans grapple with ends happily. If only real life could offer the same guarantees
Posted by Sandra Mardenfeld at 11:22 AM