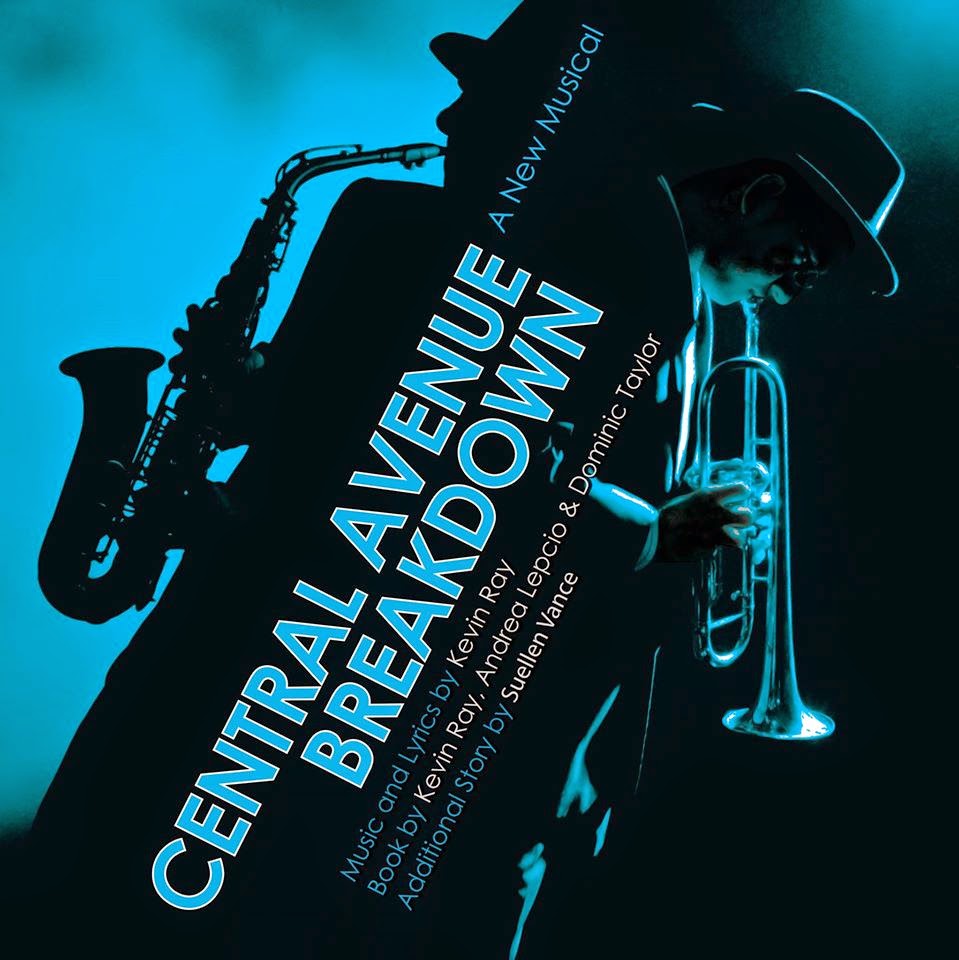 Now, based on my oevre here on this humble blog, you may think that I'm overly optimistic.  (You should see my Yelp reviews if you want to see my mean side.)  I'm curbing my adverbial impulse in hopes that this review conveys my sincerity.  This is a special show.

The story last night was communicated through small, narrated segments read by Dominic Taylor.  Central Avenue Breakdown follows two brothers, Jim and Bill, both of whom are aspiring jazz musicians on Central Avenue in late 1940s Los Angeles.  Bill, the older brother, tends to be a rule follower and musical technician, while Jim, the younger brother, is the wild-child.  Jim is not as technically proficient, but he is much freer in improvisation than his brother.  Bill books gigs, one of which carries him all the way to New York, while Jim gets thrown out of the house and develops a drug habit.  There is, of course, a girl - an up and coming Hollywood starlet named Jane - who comes between them.  Much of the story spins from the brothers' turbulent relationship with their father and sibling rivalry.

Ray's music shone, as it ought to, at a special concert.  The songs ranged from upbeat numbers that made me want to dance to soulful ballads to pieces that promised that sexy kind of danger.  I was moved to tears twice: once, by Martha (Jim and Bill's mother, performed by the stunning Stacey Sargeant) with "You Make It So Hard" and by Jim's (Rodrick Covington) "Good Enough."  There were other numbers that just blew me away.  The music is deceptively difficult in its vocal and instrumental arrangements, but the melodic licks and harmonies were performed with ease.  I was trained as a classical flutist, and man, this show made me envy jazz performance.  I don't want to spoil the ending, but it's a wonderful mix of heartbreak and triumph.  Had this been fully staged, I probably would have been a hot mess at the end.

The thing I was struck with most, however, was how much the actors loved this show, especially the ones returning to their roles.  It infused the concert with an energy that's hard to describe.  Rodrick Covington and Azudi Onyejekwe gave great performances as the two brothers.  Donna Vivino played Jane with lots of heart and a voice to boot.  In terms of character, however, I didn't get a good sense of who Jane was through her music alone, unlike some of the other characters.  Juson Williams also gets a shout out from me for his fantastic voice and irresistible energy as club owner Thaddeus McCants. Jennifer Fouche, Sheldon Henry, and Gabrielle McClinton also had some wonderful moments (Crazy awesome harmonies in "Hot Bop Fastball," "Woke Up Dead," and "Money Talks!").

The music really speaks for itself.  Due to the night's format, I didn't get a sense of the book/dialogue, so I can't really speak to that.   I'm really hoping this show moves forward.  Given the plethora of retro jukebox musicals out on Broadway right now...a fully staged Central Avenue Breakdown would be a refreshing change in every way.