The questions asked by Blood Red Roses: The Female Pirate Project are fascinating ones. How did certain women in history to break away from stifling expectations and become pirates? How did these women survive traveling on ships full of men? Money helped (Jeanne de Clisson, 1330-1359; Grace O'Malley, 1530-1603; Ching Shih, 1775-1844). If you owned the fleet, you didn't have to answer to anyone. Another option was to pass as a male (Anne "Bonne" Bonney, 1697-1720; Mary "Mark" Read, 1700-1782), hiding in plain sight. 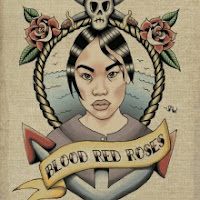 Why would a woman take this unusual and dangerous road? According to Blood Red Roses, presented by Drama of Works, the reasons include, respectively, revenge, honor, power, escape, and survival. These are juicy motivations, and these are fascinating women, Unfortunately, the amiable, intermittently clever Blood Red Roses doesn't begin to do them justice.

The show is broken into five parts, each focusing on one or two of the women. The sections begin with brief songs of introduction, using the melody of "Rolling Sea" (based on "Sailor Laddie") with new lyrics. Sometimes three-syllable words are jammed into one-syllable spaces; sometimes one-syllable words are stretched to three beats. The results are awkward and difficult to understand.

The stories are told with the help of shadow puppets, some of which (e.g., the sailboats) get old fast. There is a lot of narration and little in the way of scenes, and the women's great adventures end up reduced to little more than shadows themselves. (The brief bios of the women in the program have more depth.) In addition, the pacing is uneven; the show occasionally grinds to a halt. On the positive side, there are many songs, nicely sung, and the occasional good joke.

The overall quality of Blood Red Roses is that of a high school show, but I'm not sure why. There are moments here and there that reveal both writing and acting talent; why weren't these skills used to a fuller extent? I wonder if the ensemble--who also created, wrote, and designed the show--simply aimed too low, settling for friendly and cute. I can't help but think that Blood Red Roses could have been a much more enjoyable--and meaningful--evening in the theatre if the ensemble had taken the time to write real scenes, hone the lyrics, and polish the pacing. (Also, six pirates may just be too many for one show.)