The Pearl Theater's production of Stupid Fucking Bird, Aaron Posner's 21st-century riff/recreation of The Seagull, is well-directed, well-acted, well-designed, and a great deal of fun. Its meta approach, with actors speaking directly to the audience, silly songs, and a fresh point of view, brings energy to the familiar story. However, it does not add up to much, nor does it teach us something new about Chekhov's original play. 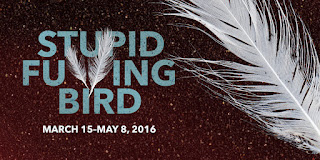 [spoilers below]
While Stupid Fucking Bird sticks loosely to Chekhov's plot, its cheerfulness does much to undercut the emotions of the story. Yes, Con's mother, the great actress Emma, will never give him the attention and support he needs, but Con is cut from very different cloth than the Konstantin of the original. Konstantin is a whiny loser. His play in the first act is the artistic equivalent of his yelling at his mother, "I hate you," and throwing a tantrum. (Not that he wouldn't be justified. That Arkadina is one lousy mother, as is Emma in Posner's play.) Con's play in the first act is similar, but Con himself is loquacious and outgoing. His constant interaction with the audience is the charming heart of the play. Similarly, the eventual happiness of Mash/Masha and Dev/Medvedenko undoes Chekhov's presentation of the traps we set for ourselves when we can't get what we want. Add to that Con's being alive at the end of the play, and Stupid Fucking Bird becomes considerably less tragic than its forebear.[end of spoilers]

So, what does Stupid Fucking Bird offer us? Well, it's a lot more fun than The Seagull, and as someone who has seen the original perhaps one time too often, it's a relief. There's something frustrating about Chekhov's characters and their stubborn unwillingness to grow, change, or simply get a clue. But beside entertainment--which is, of course, nothing to sneeze at--Stupid Fucking Bird offers little. There are no new insights, no great emotion, nothing in the way of catharsis. It's a light and amiable romp, which is also nothing the sneeze at. It just seems to want to be more.