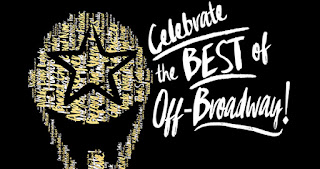 1) Every show, no matter how disagreeable, has something worthwhile in it.
Don't get me wrong. I saw some real dogs. One show was so astoundingly awful that my companion and I decided to stay through intermission specifically because we couldn't believe how soul-crushingly bad the production was and we needed to endure the second act for proof. But even that show had a nice set. Another show I struggled through had gorgeous lighting and some very nice costumes. Still another had an admirably committed leading man and an absolutely kickass band. The bottom line: there's always something that reflects the enormous time, energy, and work that goes into a show--any show. A single prop or funny line or beautiful bit of direction might not be enough to sustain an audience, but it's always there, and it matters.

2) I am far more swayed by critics than I like to tell myself I am.
As this blog might imply, I value criticism enough to try to emulate it. I read a ton of criticism for research purposes--so much so that I feel like I've become buddies with many a critic who is now retired or dead or both. But as much as I value the work critics do, I like to think they don't speak for me. Yet the experience of seeing so many shows before reviews came out taught me that often as not, I don't agree with them at all. Shows I was completely transformed by this past year were greeted with indifference or hostility by critics I realize I value and trust; the one I loved most and that won big at the ceremony was panned by a few critics and covered  merely tepidly by many others. Conversely, a few shows I disliked intensely were glowingly received. How often, I wonder, have I missed brilliant shows or wasted time on lousy ones simply because some critic suggested I should?

3) Off-Broadway audiences are different from Broadway ones.
This makes good sense, and was one of the least surprising revelations I had, but the past year really drove it home: Off Broadway audiences are more local, less touristy, more seasoned, and thus less likely to break the unspoken rules of theatergoing, like they often do in Broadway houses. Are you sick of people talking, eating, checking their phones or standing in rapturous ovation even if the show you've just sat through totally didn't deserve it? Go see something Off Broadway, where this shit sometimes happens, but much, much more infrequently than it does on the Great White Way. As an added bonus, houses are smaller, tickets are cheaper, and Off Broadway remains chill enough that you're much more likely to bump into one of the actors in the bathroom or the lobby before or after the show.

Only one dismaying similarity: In a lot of Off Broadway houses, the audiences are as blindingly, overwhelmingly white as they tend to be on Broadway. Some venues are way better than others on this front, and some shows, too, obviously appeal to more diverse audiences than others; Eclipsed, for example, had a far more diverse audience than, say, The Humans. But I was frequently disappointed to look around the house--any house--pre-curtain, and see the same sorts of people who overwhelmingly drive Broadway as well. Off Broadway houses struggling with diversity should look to the mighty mighty Public, which is clearly doing something right on this front.

4) There is an overwhelming amount of talent in this town, and also more entertainment options than a single human can ever take advantage of, ever.
I saw more theater this past year than I have since my Playbill days, and I still managed to miss an astoundingly large number of productions, either because they were not Lortel-eligible or because they were technically Off-Off and not Off-Broadway. I was so busy with Off Broadway that I could not even take into consideration the tons of opera, dance, cabaret, or comedy on regular offer, nor any of the many shows produced in theaters operating outside Manhattan, This town is absolutely lousy with live entertainment, and busy though I was, I never came close to even scratching the surface. Every so often I would think about that and quietly freak the hell out over the sheer massiveness of the offerings in this crazy, wonderful city.

5) Sitting passively in a dark theater can be wonderfully social.
Theater is a communal experience, and this fact extends well beyond the unspoken connection forged between performer and spectator. I see a lot of theater by myself, and often quite enjoy doing so. But because I was given two tickets to most Lortel-eligible shows, I more than doubled my list of theater-going buddies. I made a few new friends, deepened my connections with older ones, and got to take my husband (and occasionally my kids) on dates. My theatergoing pals and I often had dinner beforehand, or lengthy subway rides home together afterward, during which we talked about what we saw. The cameraderie this project engendered was possibly my favorite perk of the gig. Thanks, guys, for coming to see shows with me; let's see more, even if the seats aren't as good and we have to actually pay for the tickets.


I won't be able to serve as a judge again this year, once I go back to teaching and start my daughter's high school search, but I sure hope to do it again someday. Meanwhile, the Tony season is officially underway, so instead of mourning the end of my term, I'm off to catch up on the Broadway shows I haven't had time to catch.

The winners of this year's Lortel Awards can be found below. Congratulations to everyone involved with every show that ran Off Broadway through 2015-16. It was a very good year.
http://www.lortelaward.com/31st_Lortel_Winners_Announcement.pdf
Posted by Liz Wollman at 2:14 PM