While I can't say I'll miss a whole lot of things that went down in 2018, it's worth acknowledging just how good the theater was, at least in these parts. Whereas past seasons have been pretty weak, I had a lot of trouble whittling my list down to a top ten this year. Some of the ones I finally settled on weren't so easy to call: many just narrowly edged out other excellent productions (sorry, Network, Our Lady of 121st Street, Soft Power and Boys in the Band, you all kicked truly impressive ass--but something or another ended up taking your spot. I'm sure you'll forgive me. Soft Power, I'm especially eager to see you again when you're just a teeny bit clearer on what you want to be).

Anyway, thanks for the memories, 2018, at least as far as escaping to the theater goes.

To a happier and more peaceful new year--and another strong season!

SpongeBob SquarePants
My initial review was tepid, I admit it. But then, (a) the first time I saw the show, I went alone on a Wednesday afternoon, I was prepared to dislike everything I saw, and I was seated behind four ladies who all promptly fell asleep, so I was not exactly in the ideal headspace. Also, and way more importantly, (b) I did not have my son and nephew with me. Watching the show through their (very wide) eyes a second time made me realize that I'd stumbled on the perfect way to see it. My concerns about corporate soullessness vanished, especially once my son started bouncing up and down in his seat and singing along with "Best Day Ever" (we shushed him, but we all had a great time. And he wasn't the only one singing, either). Inventive, sweet, well-meaning and probably deserving of a longer run than it got, the show may remain a corporate behemoth--but it's one that had a great deal of charm, love and magic to it. 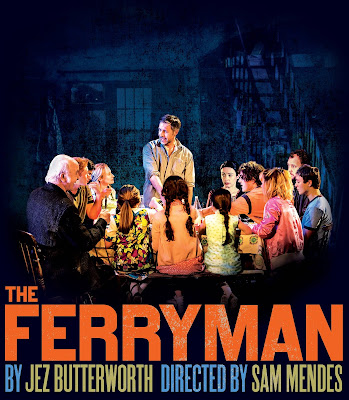 The Ferryman
The Ferryman was structured almost exactly the way Butterworth's Jerusalem was: the same loose, sweeping, frequently comedic scenes that gradually cohered into something bigger, less naturalistic, more intensely explosive--replete, even, with the same sonic build in the last scenes. The pacing thus felt lifted from the earlier (and, to me, ever-so-slightly-better) epic. Still, truly, this is the only criticism I can come up with (though I'm sure that, were I Irish, I might find plenty more to gripe about). The Ferryman is gripping, beautifully acted (even by a baby, a bunny, and a goose, for chrissakes), and I felt like I knew and cared for its many characters by the end of a fleeting three-plus hours. Butterworth might work on changing up the pacing of his future plays, but then, he's written two sweeping, huge, long, extraordinary plays, and I have never written a damn scene in my life. He totally wins this round.


The Waverly Gallery
Sweet, fleeting, and not the deepest play in the world by a longshot. But what a monster of a performance Elaine May hands in. She could have so easily played a successful, quirky, increasingly dependent woman nearing the end of her life in broad, melodramatic strokes, but May is controlled, careful, dignified and real even as her decline hastens. The rest of the cast is fine too, but damn if May's performance won't stay with me for a very long time.

While May held back in her interpretation, Glenda Jackson went full-throttle as a very different if also maddeningly headstrong elderly woman. Laurie Metcalf and Alison Pill were both fabulous too--when is Metcalf not? But Jackson awed me instantly. I'll be seeing her and Jayne Houdyshell in King Lear later this season, which I hope will be a high point of the spring.

Angels in America
Nothing will ever take the place of the original production in my heart, but this revival came awfully close. Also, it made me want to call Nathan Lane up and apologize to him for never quite understanding what the fuss was all about.

Dance Nation
Hilarious, moving, and never condescending of its tween characters, Dance Nation was something my teenage daughter and I could both relate to, laugh at, reminisce through, and bond over.

Jesus Christ Superstar
Yes, I know, it was televised, but people, you just have no idea how totally convinced I was that Superstar was absolutely impossible to stage successfully in any way, via any medium. My favorite televised live musical to date, the production wasn't perfect, but in general it rocked the house--er, armory--and proved me wrong in the most delightful ways. 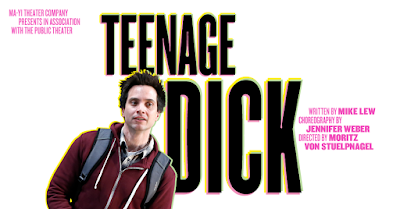 Teenage Dick
A grimly hilarious modernization of Shakespeare's Richard III set in a contemporary high school, Teenage Dick was a collaboration between the Public and the Ma-Yi Theater Company. Its cast featured, among others, the always wonderful Gregg Mozgala as a 16-year-old kid suffering through high school with cerebral palsy and a Machiavelli complex. Shannon DeVido was his buddy Buck(ingham), and Alex Breaux was his arch nemesis, (Prince) Eddie. Teenage Dick results in the same bloody, tragic violence as the original play, which I think might have put people off. But I loved it, and especially enjoyed the fact that it says more in mere seconds about disability and ableism than Shakespeare did over his entire oevre.

Happy Birthday, Wanda June
This production, staged in a teeny, musty, cluttered, old-school Off-Broadway house around the corner from the Public, completely blew me away even though I very nearly blew it off. Hoping to see more of Jason O'Connell onstage somewhere, soon.

Oklahoma!
Very easily the highlight of the year, this production reinvents a tired chestnut and makes it newly thrilling, relevant, painfully sad, and urgent in ways that I'm still thinking about. It's moving to the only space on Broadway that will be able to handle it, and I can't wait to see it again. Purists: stay home. Everyone else: run, don't walk.