It's hard to know what to write about Illuminati Lizards From Outer Space since I was unable to hear ~70% of the lyrics (100% if more than one person was singing). I don't know if it was where I was sitting (house right, fifth row, near a speaker that was blasting the musicians much louder than the singers) or bad sound design in general, but the experience was downright dreadful. For a campy show like Illuminati Lizards From Outer Space, lyrics are all-important, and, who knows, they might have been brilliant. I believe I caught a rhyme of free and happy that required a painfully unnatural emphasis on the last syllable of happy, so I doubt the lyrics actually were that great, but, again, I just don't know. 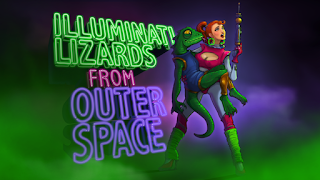 The basic plot, such as it is: A beauty queen is denied her crown because she is an "illegal alien" from Canada (which I think isn't a country in the land of Illuminati Lizards). The Illuminati lizards, who, I think, are supposed to destroy earth, or something, believe she's one of them since they are actual aliens. And stuff happens.

I think Illuminati Lizards is supposed to be a goodhearted, campy, political satire, but it comes across as though a bunch of reasonably talented people threw a pile of ideas against the wall and kept what stuck. And then they swept up the losing ideas and used them anyway.

I loved the video design by Lisa Renkel and Wayne Bryant. It stands in for scenery and periodically provides an excellent head lizard speaking from outer space (if only I could have understood more of what he was saying!).

The cast seemed pretty good, to the extent I could tell, and I was blown away by Brian Charles Rooney's huge voice. I couldn't decide if I would rather hear him sing Jim Steinman songs or opera, but I'd be glad to try either.

My apologies to everyone who worked on Illuminati Lizards From Outer Space. I wish I had been able to hear enough to provide a more useful review.