Queens Girl in the World

By Linda Drummond Johnson, Guest Reviewer
Queens Girl in the World is an extraordinary one-woman play currently in its New York debut at Theater Row. It stars Felicia Curry, an actor with many honors, awards, and accolades, and it was written by the also multiple-award-winning playwright Caleen Sinnette Jennings. It is part of a “Queens Girl” trilogy, which has been performed across the country. Queens Girl in the World is the first to be performed in New York City. 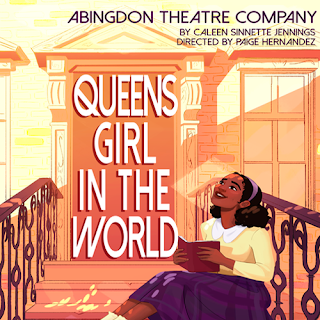 Queens Girl is a semi-autobiographical tale about a Black girl growing up in a middle income/working class Black enclave in Queens in the 60s. I also was a Black girl growing up in a middle-income/working class Black enclave in Queens in the 60s. Apparently, so was the writer, Ms. Jennings, who is pitch perfect in capturing the tone, dilemmas, personalities, sounds, conversation, and backdrop of what it meant to be a young, naive Negro girl of (relative) privilege coming of age during a politically and culturally turbulent time.
I was grinning from ear to ear under my mask a full 30 minutes before I was aware of it. Felicia Curry as Jacqueline Marie Butler (“Jackie”) wastes no time luring us into her orbit. With her shining face and beaming smile, she is wide-eyed with promise, and she inhabits the body of a self-conscious, flat-chested, “pre-mens” young lady. You will laugh every time Jackie screams as she learns about how s-e-x actually works!)
We, the audience, are seated in an intimate theater with the set of a simple stoop (“front steps” for you non-urban dwellers) and a house’s brick front backed by a large silk screen on which is projected everything from sunny skies to stars to historical figures. With Motown sounds piped in and Daisy Long’s ingenious lighting design, we are taken back to the early 1960s where Jacqueline Marie lives with her Caribbean doctor-father Charles and proper genteel mother, Grace. They, along with neighborhood and City folk, Black, Jewish, white, male, female, and of varying ages are all deftly portrayed by Ms. Curry.
Sometimes, it is a subtle change of inflection with shoulders and back hunched forward, an authentic dialect, and a particular gesture that signals the change from one character to another in a choreographed call and response. Other times, with a hip thrown one way with her body leaning the other, Curry uses a voice like a screeching metal swing to mimic the bobble-headed wise-aleck girl down the block. Ms. Curry is able, even wearing a skirt and with her hair in two “Afro puffs,” to morph into a tall, full-bodied teenage boy without becoming the caricature of one. Kudos to director /choreographer Paige Hernandez, who clearly knows when enough is enough but never too much as she keeps us in the story throughout these changes, even during one shocking encounter.
While it has a timeless coming of age theme, this story is set in a very specific place and time, where a girl “assigned Negro at birth” is hemmed in by unique circumstances: her assigned identity, the nationally burgeoning “Black” identity, and finding a personage of her own, all within unspoken class warfare between “Strivers” (the first real Black professional class, disproportionately represented in Queens by Caribbean immigrants) and their lower income American neighbors.
If that is not enough, Jackie is sent by her parents to an elite all-white private school in Greenwich village where she must navigate a progressive Jewish establishment and where she goes from being the smartest girl in her local school to needing a tutor to keep up. “Caught between the Irwin School and Erickson Street” is one of the ways she describes her quandary. (During one scene where I probably laughed a little too loudly, Jacqueline “interprets” the items in her overnight bag to a white friend during a sleepover. When she got to hair products, I lost it.)
Dad, Dr. Butler, is an activist and separatist, with a healthy distrust of white America. He is friends with Malcolm X and a fan of natural, Black beauty. The regal Mrs. Grace Butler wants her beloved only child to succeed and integrate into American society, and she grooms her to keep up with the establishment that her father disdains. Mom Grace reminds Jackie that she is not like those other (read: lower class, Southern born) Negro girls. Grace Butler also acts as the “grammar police,” ensuring that her daughter enunciates every  i-n-g  at the end of a word and never, ever, answers a question with, “Huh?” That was spot on enough to give me flashbacks!
Racism is a concept too new to Jackie to have formed an opinion about, but when it hits, it hits. She goes through puberty during a civil rights period that is moving from nonviolent resistance to the beginnings of the Black liberation movement following Malcolm’s death. Her political consciousness develops simultaneously with her breasts going from training bras to “big girl” brassieres.
This often upbeat and entertaining rendering can also wring a tear out of you as the realities of a violent world slowly leave their stain on Jackie’s innocence (while never dampening her resilience). You may also cry with laughter watching Jackie/Ms. Curry do “the Pony,” "the Jerk," and other 60’s dances with hilarious over-enthusiasm. And most everyone will identify with trying to put on the personage that will please the audience you are with, while eventually realizing, usually far into adulthood, that the audience you most need to please is in the mirror. Run, do not walk, and get your tickets to this marvelous experience. Prepare to be transported and transformed.
Linda Drummond Johnson
LindajohnsonLeadership.com
Posted by Wendy Caster at 8:08 PM