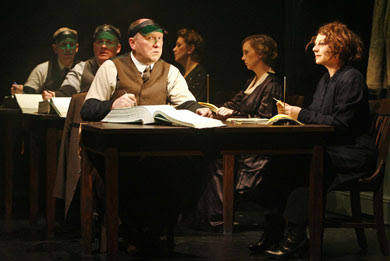 Photo/Carol Rosegg
In truth, Adding Machine doesn't add up. The music doesn't portray the mechanical; instead, it's tinny and dissonant, and only really effective when shrilling out of Mrs. Zero (Cyrilla Baer), who relies upon her husband's constant and considerable failures to make herself seem better. Combined with the original text of Elmer Rice's 1925 expressionistic play, the stark, dimly lit sets convey a gloom that is abject and anachronistic with the synthesizers, and even the racial slurs seem defanged. Joel Hatch, as Mr. Zero, does a tremendous job of carrying the leaden pace on his shoulders, a walking figment of defeat, but when he first sings -- a confession of murdering his boss -- he seems defeated by the song, too, drowned out and hoarse. If that's intentional, it adds nothing, and only heightens the contrast with a fellow-prisoner, a tenor named Shrdlu (Joe Farrell), who steals focus (by default; Farrell himself is quite forgettable) from what should be Zero's self-inflicted fall from grace. The staging is fun, with the lights creating a claustrophobic darkness and walls or cages creeping ever closer upstage, but overlong set changes make things like the uneasy transition from the real world to the Elysian Fields even more confusing. Adding Machine talks about efficiency and purpose in both the real world and in what passes for the afterlife; David Cromer's direction is to the point, but Jason Loewith and Joshua Schmidt need to learn to subtract.

[Also blogged by: Patrick]
Posted by Aaron Riccio at 8:00 PM